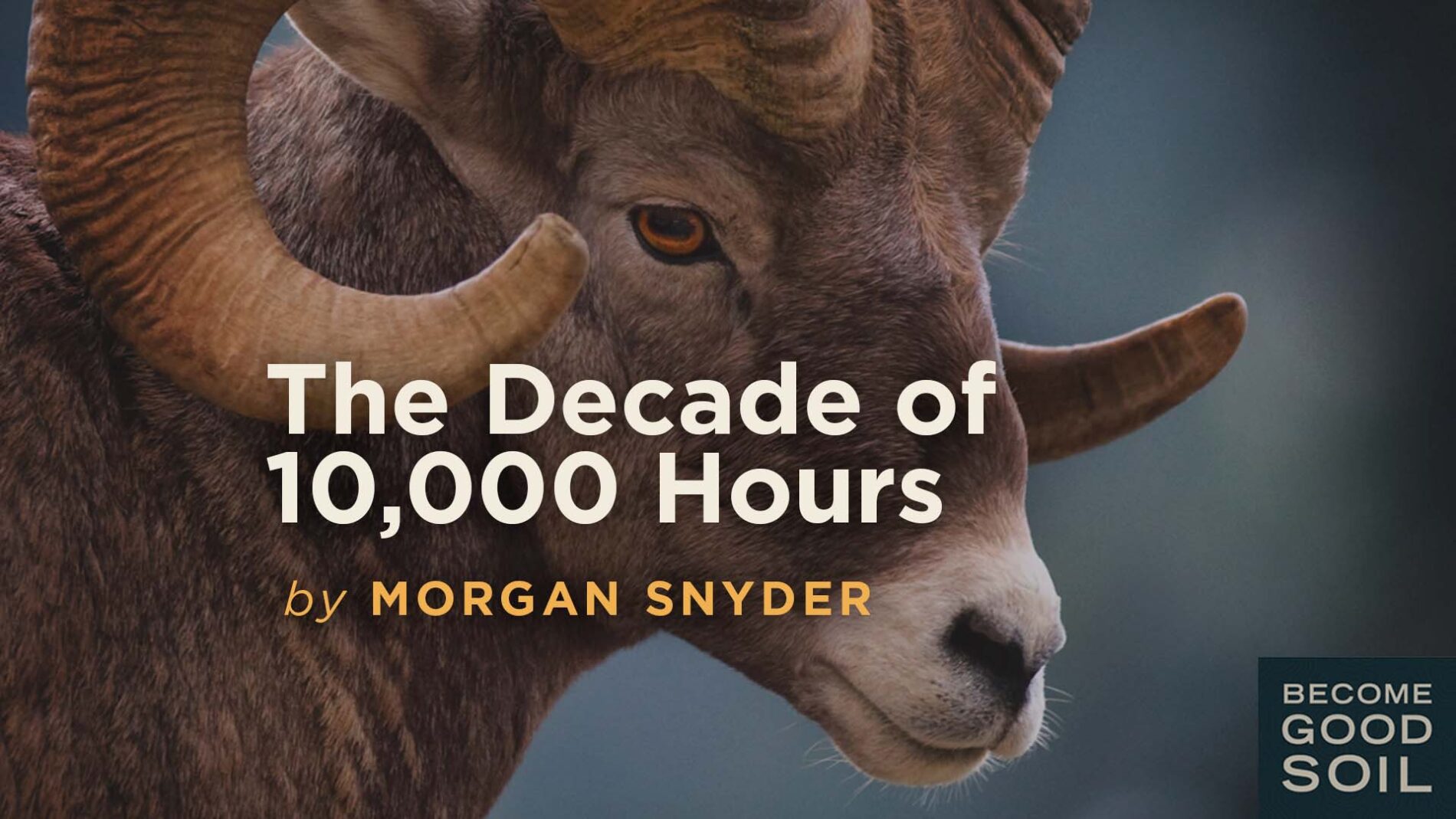 I recently returned from spending ten days in the wilderness of Colorado.

I had a once-in-a-lifetime archery tag for a Big Horn Sheep.  I gained a total of 12,585 feet of elevation bushwhacking.  No trails.  Six separate stalks on six different remarkable rams.  Wind. Cold. Beauty. Danger.

Ten days and I returned having harvested some truly great stories, but didn’t kill anything except maybe my pride.  All I have to show for it is a fractured toe, bruises, scrapes and tubs of sweat soaked camo gear.

I had so many close calls.  My first stalk was a two hour and twenty minute 2,600 foot ascent to spend three hours stalking a ram over 300 painful yards, only to finally be betrayed by shifting alpine winds.  I did an epic descent down a rock cliff face, in socks, holding on for dear life.  I launched an arrow at eight yards towards a majestic ram below me, only to hit a branch with my arrow on the release, and watch the arrow sail over his back and the broadhead explode in a display of sparks on the cliff below.

I thought all the stars were aligned.  I endured countless hours of training and preparation:  Hike after hike up Colorado mountains with a backpack filled with books. Hours of shooting my bow, pouring over maps, researching big horn sheep, consulting with the Colorado Division of Wildlife, putting together an army of borrowed gear…

And here I sit, haunted by close calls.

What can I make of this story?

Two ideas are so crucial to the decade of the thirties.

The first is that we are so quick to want to makes sense of our lives, to remove all mystery and know definitively how to interpret our reality.  We worship at the Alter of Clarity and forsake the only Source that can truly give us peace.  What if we separated experience from interpretation? Scriptures says, “Those that belong to God hear what God says.” (John 8).   What if we paused and said, “Father I trust you. I declare that I belong to you and trust to hear your voice. I release any demands for interpretation and make myself open and available to you, to speak in your time about all of this to me.”

Spiritual lust causes me to demand and answer from God, instead of seeking God Himself who gives the answer… whenever we insist that God should give us an answer to prayer we are off track.  The purpose of prayer is that we get a hold of God, not the answer.”

Second is this remarkable idea I have been learning in a book titled Outliers, which I strongly recommend.  It’s called The 10,000 Hour Rule.  It refers to world-class musicians, and a study on the role both natural ability and practice played in their greatness.  The study showed with overwhelming clarity the following:

“The striking thing about Ericson’s study is that he and his colleagues couldn’t find any ‘naturals,’ musicians who floated effortlessly to the top while practicing a fraction of the time their peers did.  Nor could they find any ‘grinds,’ people who worked harder than everyone else, yet just didn’t have what it takes to break the top ranks.  Their research suggests that once a musician has enough ability to get into a top music school, the thing that distinguishes one performer from another is how hard he or she works.  That’s it.  And what’s more, the people at the very top don’t work just harder or even much harder than everyone else.  They work much, much harder.  The idea that excellence at performing a complex task requires a critical minimum level of practice surfaces again the top level.  Even Mozart – the greatest musical prodigy of all time – couldn’t hit his stride until he had his ten thousand hours in.  Practice isn’t the think you do once you’re good.  It’s the thing you do that makes you good.”

I want to be a remarkable bow hunter.

And more than that, I want to be a remarkable man.

On the outside of my bow case is a homemade sticker that says,

I’ve learned archery is about harvesting great stories before it is about harvesting animals.  While an interpretation for what (seemingly) went wrong with my sheep hunt still eludes me, one thing I know for sure.  I logged many painful and beautiful miles in the field.  I have the blood, sweat, tears and stories to prove it.  And I am that much closer to my 10,000 hours of “practice”.

So too, is the masculine journey.  The thirties is the decade of discipleship.  It is the decade of 10,000 hours.  As Teddy Roosevelt put it, being in the arena.  It’s a decade of stories and experiences.  It’s the decade of logging the long hard miles of restoration of character.

What story do you want?

Where are you in putting in your 10,000 hour investment to make it a remarkable one?

One day, I believe we will be remarkable.

Note: for more on The 10,000 hour rule and to meet the author of Outliers check out this interview: