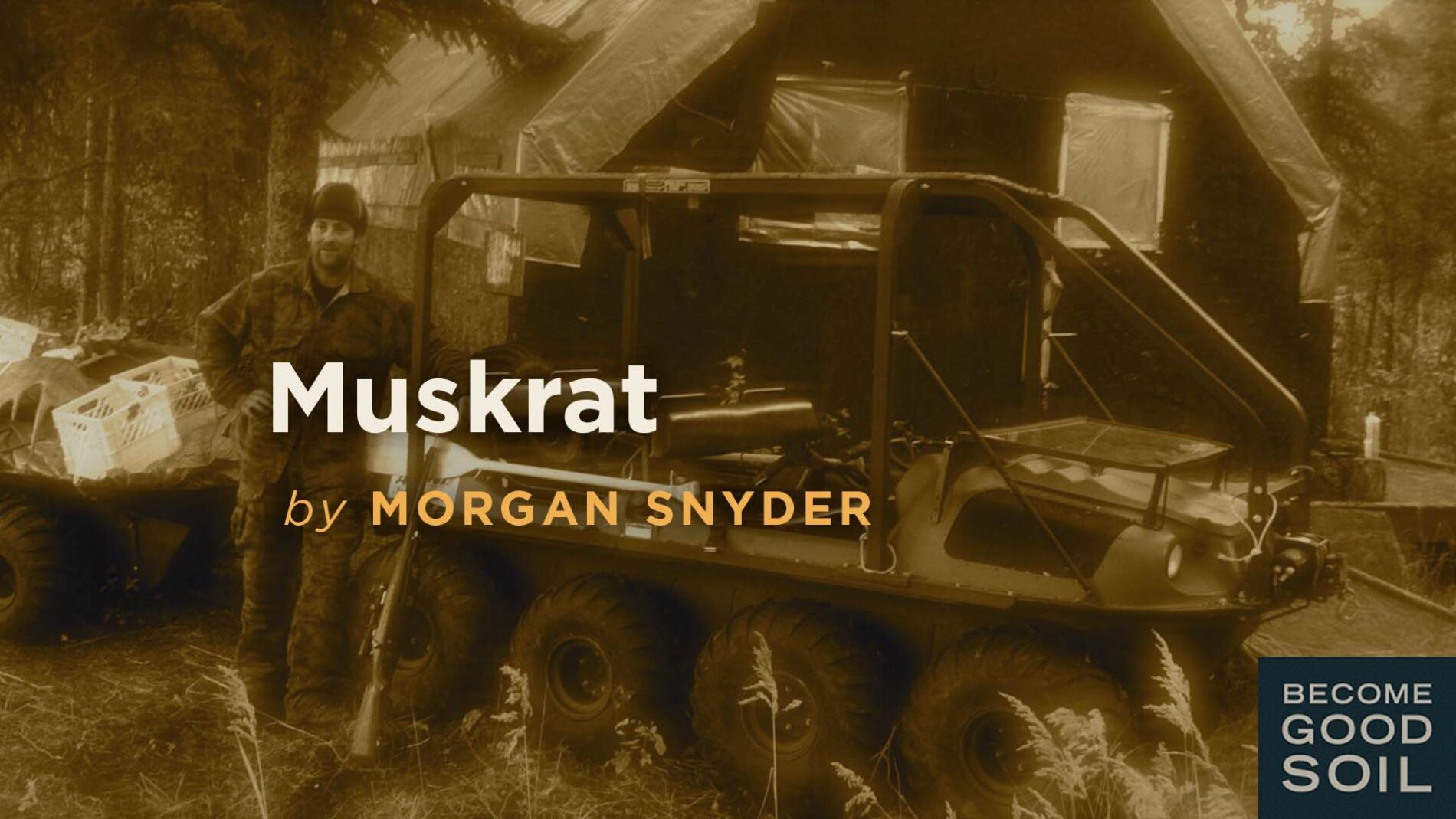 A few months ago my buddy John and I found ourselves deep in the wilderness of the Yukon. The pilgrimage to get there required over 3000 miles of commercial flying, a 250 km drive deep into the bush, a float plane to a remote lake, and a four-hour Argo trudge through woods, bog, and river. (Click here for a visual on the Argo journey if the video doesn’t appear below).

We were further off the grid than I had ever been in my life.  Drinking out of the stream, rationing the few precious beers that survived the arduous trek to base camp, and walking game trails with fresh grizzly tracks (likely a relative of the monster grizzly that was harvested in this very spot last year).

I thought it was going to be mostly about hunting. But in the end, that wasn’t the gift God had intended. The gift was actually apprenticeship and invitation.

I’ve never had an interest in being a part of a guided hunt.  Eleven years of hunting has consisted mostly of teaching myself, asking a lot of questions, spending as much time as I can in the woods, making plenty of mistakes, learning painful lessons the hard way, and finally becoming a decent hunter and a neophyte woodsman.  “DIY” (Do It Yourself) hunting has a joy that is hard to match.  But this particular experience was unique and I could sense there were some gifts to be revealed along the way.

Muskrat is the name we affectionately bestowed on Bryon Patchin by day four, after he pulled out a muskrat hat that he had made with his own hands, harvested from his winter trap line. Muskrat is a trapper by trade and fills his spare time by guiding hunting and fishing adventures in the backcountry.  He lives in a town of 28 people in northern Canada, closer to the Arctic Ocean than to Colorado.  And for ten days, we had all of his wisdom and skill to watch, interact with, and lean into. Ten days of life-on-life apprenticeship.

It reminded me of what Robert Bly talks about in Iron John regarding true apprenticeship:

When a father and son do spend long hours together, which some fathers and sons still do, we could say that a substance almost like food passes from the older body to the younger.

I was a Padawan with a Jedi of the way of the woods.

-Learning how to read tracks and a trail, understand animal behavior, lifecycle, activity and habitat.

-How to cook over a wood stove and campfire.

-How to handle a winch.

-How to handle and maintain a chainsaw.

-How to choose good firewood and how to split firewood.

-How to properly care for wild game for days in the wilderness.

-How to trap a beaver, muskrat, coyote, and wolf.

-How to tie life-saving knots.

-Learning patience, pace, and how to listen.

-Learning to be present.

Muskrat once cut and split 700 cords of firewood in the bush over two months time with a chainsaw and axe and only one other man.

He is a craftsman and an artist who has fierce mastery over his world. He built his house and his livelihood with his own sweat and hands.  In some ways his world is small, regarding the footprint. And yet its depth and breadth make it so much more vast in some ways than the lives of many men who inhabit a space a mile wide and an inch deep.

Everything he owns he knows both how it works and how to repair it.

He couldn’t be more different from the eco-friendly urban green folks who drive SUVs and pride themselves in using recycled bags and fluorescent light bulbs (I am among them).  But as a paradox, his life is more a living parable for the realities of reduce, re-use, and recycle than for anyone I’ve ever met.

He’s a hired guide, working a hunting camp he may never return to and at a minimum no one else will inhabit for at least a year. Yet, he has a pride of ownership and a care for the land.  He leaves it better than he found it; including fresh cut firewood for the next man who braves the trek or merely finds himself stranded and in need of warmth. In 10 days I didn’t see him multi-task once.  Whatever he did, he did it with intention, artistry, and care; whether repairing the Argo, splitting firewood, cooking a meal or tracking a moose. He could read a trail better than most men read through their inbox.  He would tune in, take his time. He would “be” nowhere else but “here.” It was unnerving in a way.  Sometimes, I thought he was even exaggerating the signs to keep our hope buoyed as we were in pursuit of a moose. Yet as the days went on, I began to see what he saw, at least in part.  I began to see with him the indicators about what animals came through – their species, size and direction.  He began to piece the creatures’ stories together and in turn allow our story to intercept theirs, creating close encounters while on foot with the bow.  It was primitive and masculine artistry.  True and beautiful.

Bryon (Muskrat) wielded the chainsaw like a master painter wields a brush.  It was like an extension of his body, even of his inner world. It was a wonder to sit by his side and watch him work the chain with his file, sharpening link by link with the utmost precision, as though he were cutting a diamond. Fierce Mastery – incarnate.  It was holy. It was beautiful.  All at once an act of grace and yet the culmination of years of relentless pursuit, trial and error, time in the field, skill-refining, hard work and eventual mastery.

I came home and bought a chainsaw.

I put up a cord of firewood for the winter in our little suburgatory bungalow. It’s the only response my heart could find.

Want more on this? Check out Stranded with Flip Flops – A Case for a Generalist