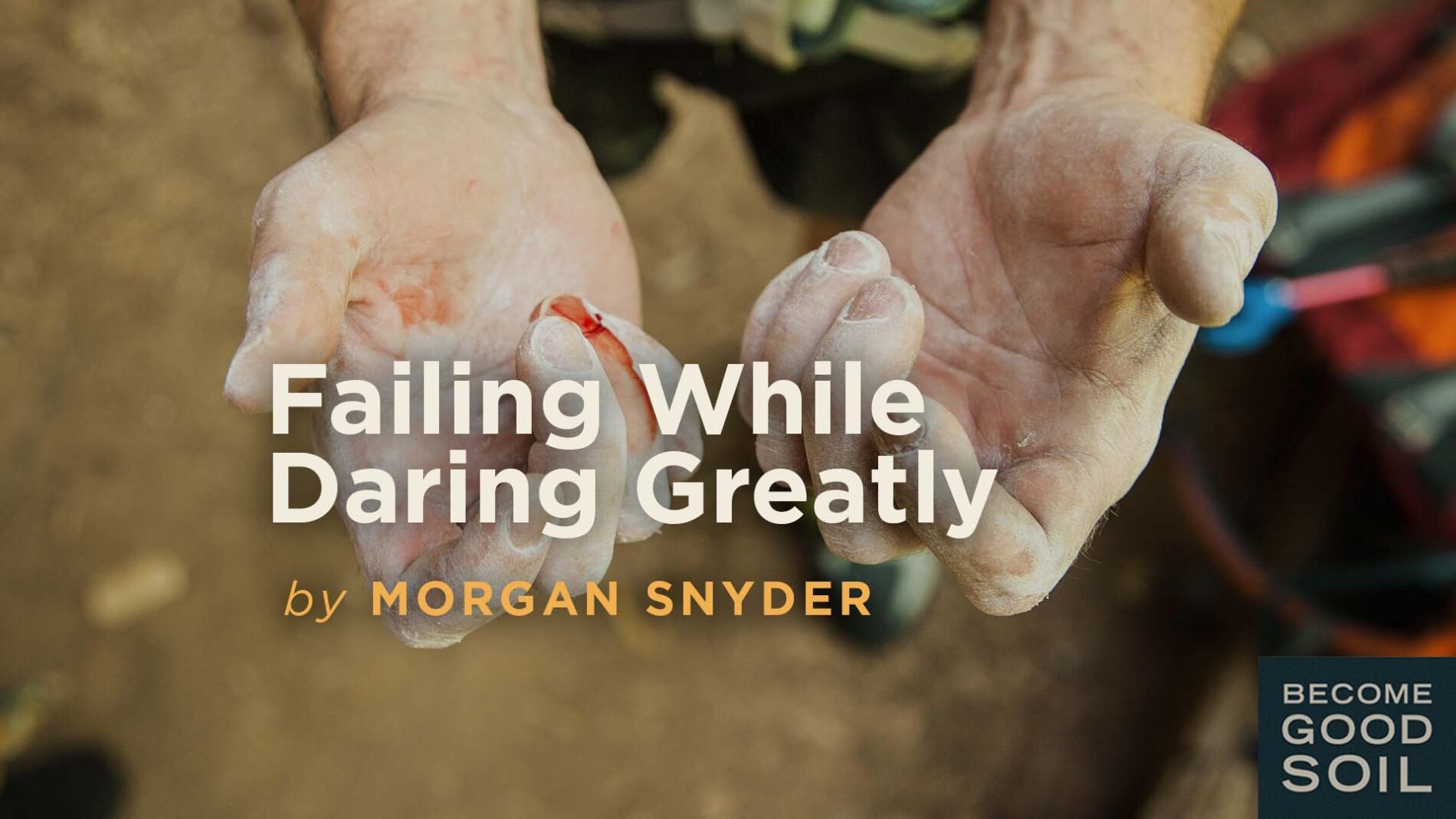 “Everyone has a plan until they get punched in the mouth.” – Mike Tyson

The narrow road to becoming a man of noble strength and love inevitably involves a poignant list of as many failures as it does sucesses.

I’ve been receiving a lot lately from Brene Brown and her teaching and world class research on shame and vulnerability.  She has given some remarkable Ted talks.

In a recent Ted talk she gave great visibility to failure:

“You know what the big secret about TED is? This is like the failure conference…You know why this place is amazing? Because very few people here are afraid to fail. And no one that gets on this stage so far that I’ve seen has not failed. I have failed miserably, many times. I don’t think the world understands that because of shame.” – Brene Brown

An excerpt from a  speech Teddy Roosevelt delivered in Paris in 1910, known to most of us as “The Man in the Arena” quote, touched some deep place in my heart as a young man on this subject of failure and success:

It is not the critic who counts; not the man who points out how the strong man stumbles, or where the doer of deeds could have done them better. The credit belongs to the man who is actually in the arena, whose face is marred by dust and sweat and blood; who strives valiantly; who errs, who comes short again and again, because there is no effort without error and shortcoming; but who does actually strive to do the deeds; who knows great enthusiasms, the great devotions; who spends himself in a worthy cause; who at the best knows in the end the triumph of high achievement, and who at the worst, if he fails, at least fails while daring greatly, so that his place shall never be with those cold and timid souls who neither know victory nor defeat.

Something in me knew that this was true when I first read it years ago. What matters most is the willingness to risk and actually enter the arena, to spend oneself on a worthy cause with courage and action, knowing that inevitably there will be moments of error “because there is no effort without error and shortcoming,” and that “daring greatly” is of high value regardless of the failure or success of the endeavor. My heart rose with longing to be that man.

And yet, looking back, at the time this value of “daring greatly”, even if it ended in failure, was merely inspiration and not yet an internalized value forged in fire.

I’ve come to learn is this: the seeming failures, over time, seem to bring more fruit than the successes.

And each time failure comes, it’s not that the failures hurt less. It’s that they hurt better.

I have a garage wallpapered in unfilled hunting tags.  And I don’t have enough fingers to count the failed relationships and fitness goals. I have lists of failed real estate projects, business ventures, writing projects, financial investments, dismal college savings accounts for the kids.  It gets deeper.  I couldn’t save my brother’s life.  I battled for eighteen months against brain cancer. I fought to save his marriage, his career, his humor, his dignity… so much of it in the end was sand running through my calloused fingers.  The list goes on…

Checkmarks in both columns only come from taking risks. From choosing to live in a way that requires God to show up.

And remember, “There is no effort without error and shortcoming,” reminds Roosevelt.

Dallas Willard suggests that it requires true courage to lay down control of outcomes.

In 1962 JFK created the Navy Seals as a specialzed unit of the world’s most elite force for handling the most dangerous missions.  In Cade Courtley’s book, Seal survival guide, he emphasizes a Navy Seals motto:

“Plan for success and train for failure.”

There some deep truth of the masculine journey in this motto.

Plan for success and train for failure.

“Where are you succeeding?”

I would rather ask,

“Where are you daring greatly?”

The thrill of victory and the agony of defeat.

What are your checkmarks?

Are you risking enough to be acquiring a healthy mosaic of failures?

How have you interpreted them?

Father forgive me for judging failure as a category very different from how you intended.  Forgive me for interpreting failure through a lens of fear and shame rather than from a place of sonship.  I invite you to teach me afresh – I want to unlearn how I have learned the significance of failure. I want to experience your interpretation of failure and your way of using it as a context to initiate me and mature me as a man, and to validate me as a son.  I give you alone permission to interpret the list of defeats in my life.  Father, I ask as well that you would remind me of the victories we have had together and help me to hold onto those tightly in my memory.

I ask that you would give me increasing courage to “dare greatly” and risk the possibility of failure, because the life of whole-heartedness and the intimacy that I so long for with you is available on no other path…