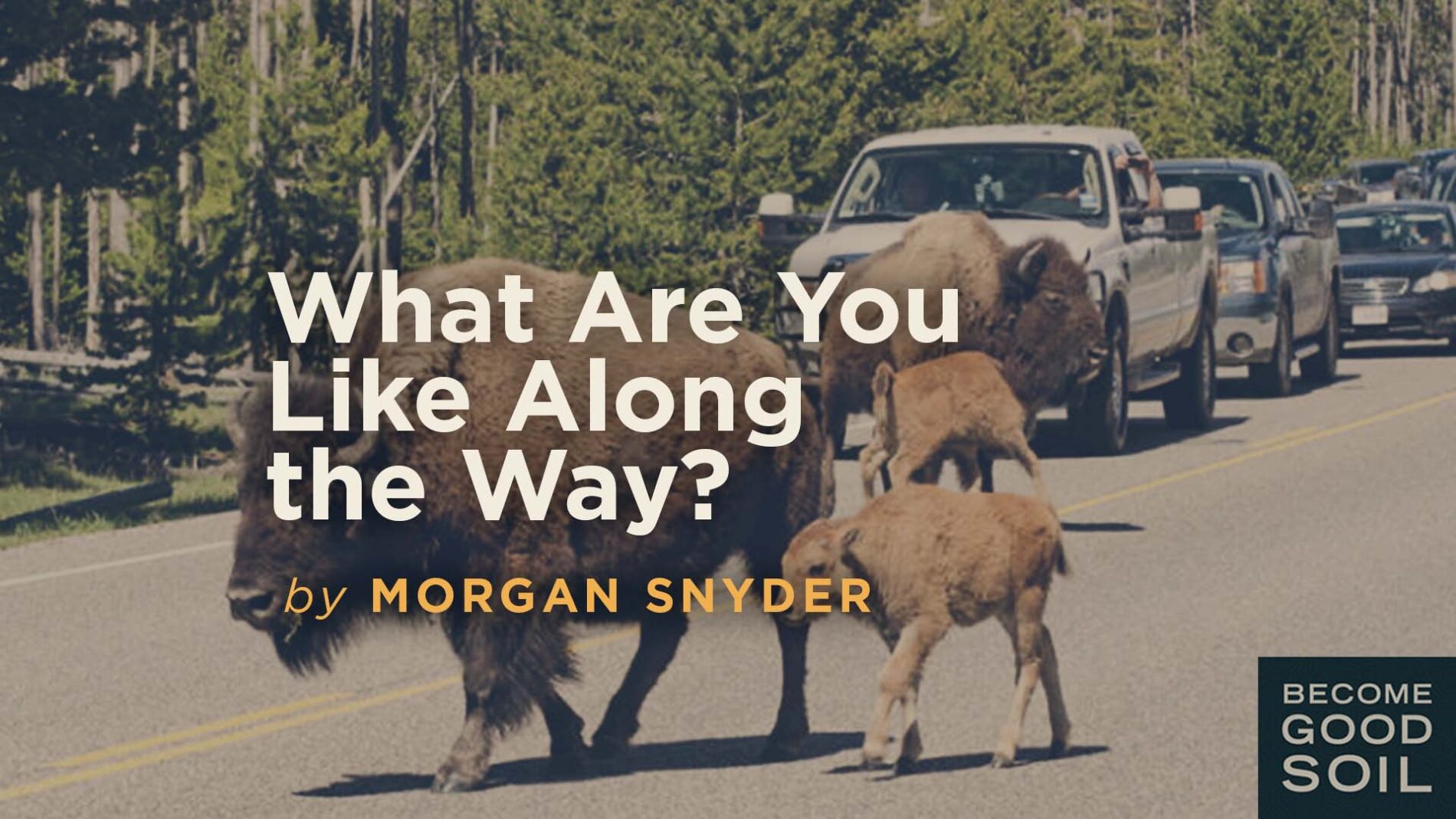 Most of the things that happen to me along the way, I experience as interruptions.

I set my calendar and my day with the best of intentions. Inevitably, all kinds of things come up that aren’t on that calendar; those interruptions feel like roadblocks, leaving me frustrated and put out.  Let me be even more clear: more times than I can count, I find myself acting like a complete ass as I’m interrupted time and time again in my zealous quest to accomplish what I have named good and even godly things.  Or worse, I keep a good front while inside I’m pissed by the interruption.

Someone pops into my office during a precious hour to focus on a project with a hard deadline.  And they need a listening ear.  My kids want to linger over a story, some wrestling and some laughter, and I’m pushing to get them fed, get them in the car, get them to sleep, (fill in the blank).  The phone rings.  I don’t know if it’s from God or not, but I do know I don’t have the time.  I’ve got a window for a workout and right then my wife sends me a text and asks if I have a few minutes to talk.

In so many ways, my life looks nothing like Jesus…

As I read the Gospels and take a heart-observation of his life and his way, it is amazing how much of his ministry and his life happened along the way…

Remember the story of Jesus going after the heart of Zacchaeus, the tax collector?  It happened along the way as “Jesus entered Jericho and was passing through” (Luke 19:1).

Remember when he cast out a spirit of infirmity in Simon’s mother-in-law?  It happened along the way when he was headed to the home of one of his best friends to chillax on the Sabbath (Luke 4:39).

Remember when he called Simon, James, and John to be his disciples while they were out in their fishing boats?  It happened along the way after Jesus had used Simon’s boat to push off from shore so he could best position himself to speak to the hearts of the masses gathering around (Luke 5).

Remember when Jesus called out the Pharisees who accused him of hanging with the roughneck crowd at the party his buddy Levi threw for him— “who needs a doctor: the healthy or the sick? I’m here inviting outsiders, not insiders—an invitation to a changed life, changed inside and out” (Luke 5:31 MSG)? This revelation of the unheard-of nature of Jesus’ invitation happened along the way when the very “agenda” for the evening was to eat, drink, and be merry.

Remember when Jesus fed those five thousand hungry folks with five loaves of bread and two smoked trout?  It happened along the way. His plan had been to steal away for some much needed solitude and grieve the death of his cousin John, away from the mob of needy folks who were desperate for the Life he had.  He even jumped in a boat to withdraw “privately to a solitary place.”  But the broken-hearted folks found him, and in his profound compassion, Jesus changed plans and offered them life, love, nourishment, and healing along the way (Matthew 14).

The woman at the well…

Raising the widow’s son from the dead…

Essential conversations with his disciples…

I recently read this quote from Dallas Willard that captures some essence of Jesus’ way:

I am frequently asked, in so many words, “Why do you follow Jesus Christ?” My answer is always the same: “Who else did you have in mind?” I am open, I am willing, and I always seek to know more. But so far I have found no one who remotely compares to Jesus Christ as a practical guide to how things are and should be in human life.

What should I make of the “practical guide to how things are and should be in human life” that Jesus’ response to “interruptions” provides me?

What if the interruptions that happen along the way are actually the epicenter of what God is up to as it seems so often to be in Jesus’ life?

What if how people experience us along the way speaks a lot more about who we are than our list of recent accomplishments?

This morning I really needed a workout.  I had huge hopes of both an exercise class and a run to re-energize me before a day full of demands.  When I walked into class, the first person I saw was a friend whose mother has had a a sudden onset of brutal cancer and is close to crossing into Eternity.  My friend has little kids at home and the large Starbucks in her hand was a sign of her fatigue and perhaps her reach for a lifeline.  I’ve been praying for this family and knew immediately this was an unplanned, unbudgeted, along the way moment.  After class I was able to pull her aside, come to the center of her pain, catch her heart, and receive some tears. I empathized with her as the cruel rampage of cancer is a story I know all too well, as it is the third anniversary of my brother’s brain surgery to remove the tumor that would take his young life eighteen months later.  I was able to pray Psalm 23 deep into her heart and offer her words of counsel, hope, and especially empathy.  It cost me the rest of my needed workout, but my cup was overflowing.

I wish I were able to say this was not the exception, but the rule.  How many times have I missed this chance to “become” and thrown the label of “interruption” on what God is labeling “invitation to life”?

Recently had the honor of participating in a glorious wedding.  Somewhere between the ceremony and reception, everything seemed to fall apart between Cherie and me.  At first I completely missed God in the midst and was sliding violently down an emotional cliff and coming to a boatload of conclusions about marriage and our future that were unhelpful to say the least.  Anger, tears, and words flung like mud balls, until we realized that God was actually choosing this inconvenient moment to raise one of the deepest pockets of shame in Cherie’s story. He was inviting us to pause, re-direct our plan, and invite him to come and heal her heart in this place.  It was one of the most difficult and glorious moments of our thirteen years of marriage. We were an hour late to the reception and entered awkwardly, clinging to a thread of belief that it was God who disrupted our plans and brought the treasures he was after, along the way.

Jesus, I’m embarrassed by how often I label what you are bringing, offering, and asking as “interruption.”

You knew something I don’t. You knew what it looked like to care for your own heart, to choose to safeguard what your soul needed so that you could be a reservoir, filled to overflowing, being both aware of your Father moving along the way and having the heart and courage to engage in it regularly with belief and ease.  Apprentice me in what it looks like to live united to you.  You are the vine. I’m the branch. Apart from you I can do nothing.  I want to live and breathe in you. I want to have my life in you.  You model what it looks like to live in union with our Father.  To draw on Kingdom life and energy whereby we find a pace that is kind and right for our soul, and a way of life that flows in an unforced rhythm of grace.  I don’t want you to be an interruption in my life anymore. I want you to be the centerpiece and source of my life moment by moment.  Show me what is operating below my circumstances.  Take me into the roots of this disconnect.

Open my heart, along the way…