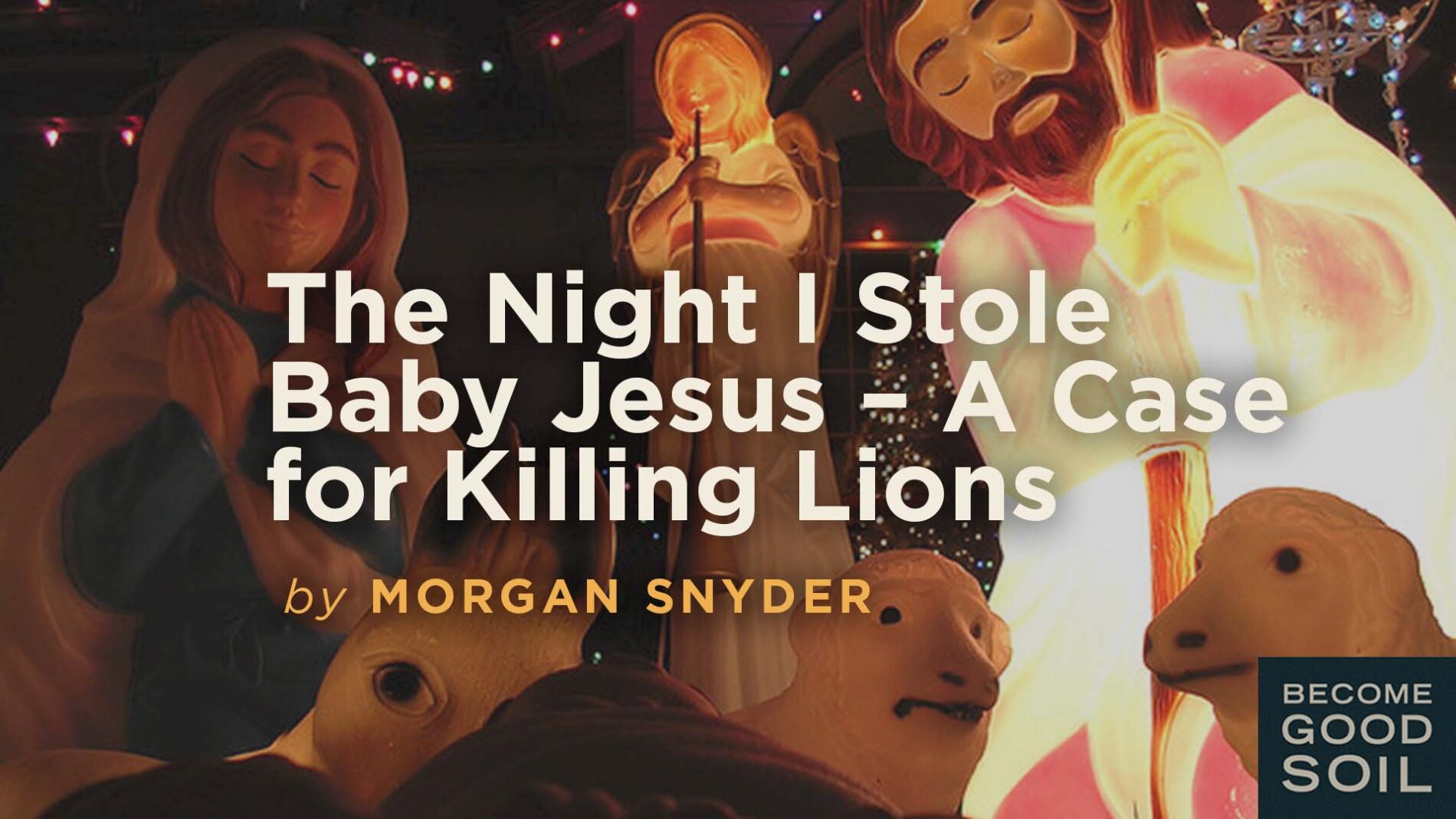 December 1994.  The tires screeched, spinning out on slick wet asphalt as we raced around the corner in the getaway car. Mary and Joseph were securely in our possession in the back of our speeding SUV with the hatch still open.

Mission accomplished…or so we thought.

Images from all the best chase scenes of the ’80s blazed through my mind—Beverly Hills Cop, Die Hard, The A-Team.

Yet like most great heists, this one soon proved to have a complication…

The mission objective seemed straight forward:  Us neophyte frat guys were to “acquire” decorations for the fraternity Christmas party. Budget: $0.00.

In the mid-December darkness, we had roamed the neighborhood next to campus, scoping our options. I don’t remember whose eyes first spotted the nativity scene abounding in yellowish heavenly glow, but our reaction was unanimous: visions of a life-sized Mary and Joseph accessorizing a yuletide tower of cheap beer at the frat house danced in our heads. Within minutes, Mary and Joseph lay side by side in the back of the careening truck.

Abruptly we became aware of a strange banging sound behind us. We turned our heads only to behold none other than the baby Jesus in tow.

It had never dawned on us that it was more than the Deep Magic of Christmas that shined celestial light upon the babe in the manger; in fact, it was a 110-volt power cord that also connected Jesus to his parents more intimately than had we accounted for.

Jesus was flailing and banging on end of a 15-foot electric umbilical cord and we were now racing toward rush hour traffic on a four lane road, needing to make a split-second decision.  Do we pull baby Jesus into the truck or do we cut him loose?  Funny how much can be in a metaphor…

We scrambled for a pocket knife, but not surprisingly, there was none among us young, uninitiated kids.  And before we could come up with another option, the cord broke and Jesus was gone.

More was transpiring in that moment than a decoration highjack.  It was a tragedy and comedy of thirst: the misappropriation of energy whose source was in the core spaces where eternity has been set in our hearts. I think of the Scottish proverb that captures it best.

“They speak often of my drinking but never of my thirst.”

I was a young man thirsty to find life. Direly in need of finding my place in the world. Looking for my deep question as a young man to be answered.  I was longing to live in a band of brothers, to be part of a heroic fellowship that was swept up into a story larger than myself, requiring something more of me—something deeper, something more courageous, than I found in my normal life. I suppose a reaching to have that thirst quenched is what led me to the back of an SUV on that starry night.

How do I develop true brotherhood and engage in some heroic mission bigger than myself?

How do I pursue a woman with strength and integrity?

How do I navigate finances?

How do I interpret adversity in my life?

How do I live with courage in the face of such great risk?

And in it all, do I have what it takes?

How do I truly become a man?

What I would have given in my college years for someone to have placed Killing Lions in my hands.

What it would have meant to have the faith-filled coaching and encouragement of a father, an uncle, and a brother; to have a life-giving interpretation of my story, to have a guide.

Killing Lions, both the newly released book and film series,  is nothing short of an invitation into the wild, daring adventure of becoming a man. It speaks to young men directly where they are, meeting them in their language and on their terms.

I never did see Jesus at that Christmas Party, though as I look back on it now, I was intensely looking for Him. The only other figure that popped up near Mary and Joseph was a fully illuminated five-foot tall Frosty the Snowman with a 10 inch rubber-hose conveniently protruding between his snowballs, delivering an endless stream of holiday cheer.

But I did find Jesus shortly after that party. And I found that He was looking for me.  First through the heart of a woman on that same frat deck, then through the hearts of a few good men.  Those good brothers, uncles, and fathers have all invited me into a story that continues to this very day – two decades later, a story more adventurous, more thrilling, and more life-filled than I could have ever dreamed.

Many of those earliest steps into my journey as a man were lived out with John and his sons. And in Killing Lions, John and his son Sam have put words some of those same soul-strengthening and life-giving ideas that rescued me in my early 20s.

This is a tool that can help young men recover their heart and strength.  Through it, more masculine hearts can be strengthened and made whole.  And in turn, more marriages can start off rooted in identity and wholeness and more children can be raised by dads who are more armed to bring a genuine strength, rooted in the Love of their Father, to a young family that needs them. There is much at stake, both for the present and for the future.

If you are in your teen years or 20s and are thirsty for a life that is truly life, or if you know a young man who is, get Killing Lions.  How much ache of soul might have been tended in me if I’d had this book twenty years ago. How much ache of soul can be tended for so many young men today.

And who knows, the more men we can reach with Killing Lions, the more heavenly-glowing nativity scenes can be saved, bringing peace on earth and good will toward men.