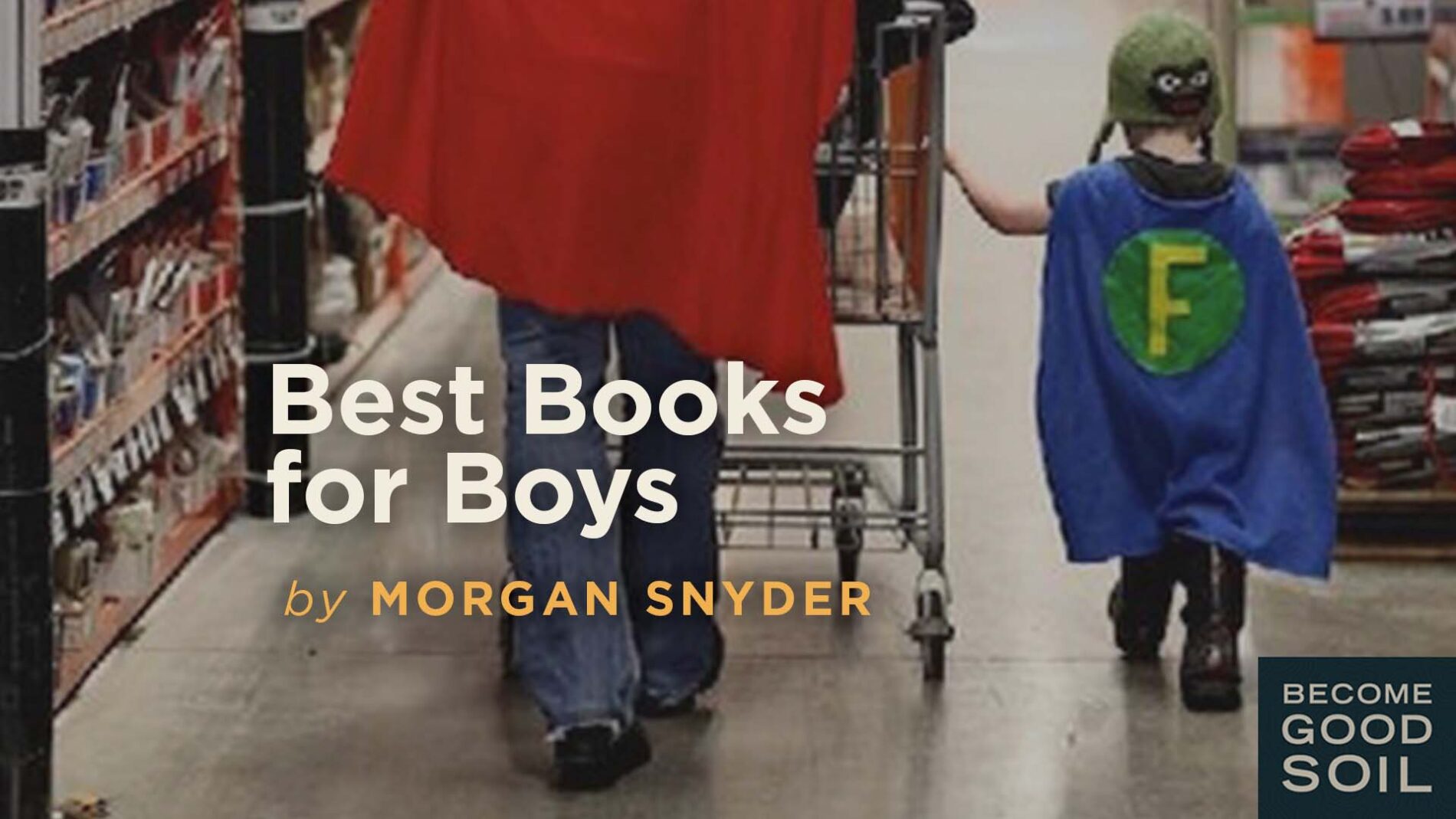 We could barely turn the page, knowing it meant accepting the reality that Little Britches would lose his father.  At the vulnerable age of eleven, it was more for young Ralph Moody (whose cowboy mentors had nicknamed Little Britches) than losing his dad.  It was losing the epicenter of his reality, the well from which he drew life-sustaining water. It was losing the bedrock upon which he could laugh, play, and have wide open spaces to make the big mistakes every boy must make. It was losing his True North.

Joshua, my own little nine-year old, and I were snuggled up together on his bottom bunk, both of our faces wet with tears. The story of this young boy had transported us from our suburban 21st-century life to an early 20th-century homestead on the arid plains of Colorado, just a stone’s throw away. More than that, Little Britches’ story was transporting us into a Greater Story more poignant, valiant, and beautiful than we had words to describe. And because of his story, we could see and feel this Greater Story more vividly than we ever could have without him.

Our shared tears proved testament to the unspoken reality tugging at both our souls. Our hearts were breaking for young Ralph and his family, but there was more to our feeling than empathy.  If Little Britches could lose his dad to a tragic accident, what do our hearts do with the fact that Joshua is just as vulnerable to losing me? In that sacred moment after finishing the story, we held each other tightly in the silence of his small bedroom under the cover of night, receiving comfort and assurance from our Father in Heaven whom we can never lose and who has promised us that the day will come where Joshua and I will be together with Him in His Kingdom, inseparable forever.

Heaven touched earth in that moment.  As Jesus describes it, “The Kingdom of God was at hand.” All through the power of reading aloud a great book together.

It wasn’t the first time for us.

Thanks to several mentors (chiefly the directors of Preschool Partners, Jim and Mary Kretchman) who urged us to cultivate a culture of reading aloud daily with our kids, we have regularly been swept up together into stories of Kingdom proportions. And these stories have served as both compass and manna for us as we travel together this unchartered, narrow road of sonship and becoming good soil.

One of our covert missions as parents is to invite our kids into the Largest Story of all. Yet there is a natural law that holds sway for us and our kids alike: we will all gravitate to the largest story we can find. Therefore, we must be fiercely intentional about the stories that both we and our kids encounter. Particularly, we must take responsibility for the scale, heroism, and richness of the version of God’s story we are sharing with them. Our goal is to show them that only God’s Story is colossal enough to contain the breadth and depth of their hearts and desire.

Everyday I ask myself two questions: What is the story I am living in? And what is the Christianity I am offering to my kids?

The offer of Christianity was meant to be Life.  Life to the full. But if the story I am living in as a follower of Jesus is not more attractive and full of life, beauty, noble battle, adventure, and delight in the heroic than the stories that play out among my kids’ peers and in their culture, it will never be big enough to hold their hearts.

Reading great books aloud can capture the hearts of our kids for Jesus’ Story and winsomely apprentice them to the realities of the Kingdom of God. As Paul reminds us, we are God’s masterpiece, uniquely created with good and noble hearts (Ephesians 2:10, NLT) to play an irreplaceable role in God’s Story, a story full of intimacy, beauty, and adventure. But something has gone terribly wrong: there has been a tragic turn in the plot. Even worse, there is an enemy who is set to destroy us and our sons. Yet there is also a brilliant, loving and good Hero who champions the story through to an epic conclusion:

Great books offer permission to believe that there is more to life than readily meets the 21st-century eye: there is more beauty, nobility, and transcendence than what you can find down the aisles of Walmart.

Over time, as we borrow strength and courage from each hero and heroine, their adventures become ours as ours somehow become theirs. We are connected to them as sons, brothers, friends, and allies and draw strength from their valor. And we are connected to their geographies and nourished by their relationships with Nature, God, and one another.

Eugene Petersen, author of  The Message translation of the Scriptures, captures it this way.

Stories are the most prominent biblical way of helping us see ourselves in ‘The God Story,’ which always gets around to the story of God making and saving us. Stories, in contrast to abstract statements of truth, tease us into becoming participants in what is being said. We find ourselves involved in the action. The may start out as spectators or critics, but if the story is good, we find ourselves no longer just listening to but inhabiting the story.

Great books provide the inspiration to hang on to all that is true, good, and beautiful in the face of an enemy who wants to destroy truth, goodness and beauty in us and in the world.

The power of reading aloud with your kids is accessible.

It is available.  It’s not too late.

Hear it again: it’s not too late.

It doesn’t matter how old your kids are: as our mentors said, keep reading aloud with them as long as they live under your roof and even beyond.

Below is a list of books Joshua and I have deeply enjoyed.  I’d recommend that you work your way through this list as a starting point. And as you create your own library and stumble upon a favorite or two that we haven’t found, let us know.  We’re always looking for the wardrobe into Narnia…

Danny the Champion of the World by Roald Dahl

The Old Man and the Boy by Robert Ruark

Finally, a story that captures the heart of a Kingdom grandfather.  It not only gave me a vision of what my life could look like as a grandfather, but it has become a launching pad for continued adventures, wisdom, initiation, and play with my son.  It’s a must!

Where the Red Fern Grows by Wilson Rawls

Few stories present such a compelling possibility of what it is available for a boy when he chooses to walk with God into the epic adventure set before him. Few stories have left us, together, with such longing for more of God.  This is a must-have to wrestle with the raw and beautiful realities of life, death, boyhood, adventure, and the wildly personal and intimate hand of God weaving His redemptive promise through it all.

In this first book in the series, Ralph Moody recounts this rare and remarkable autobiography of his family’s journey west with a suitcase and a dream in 1906 to establish a Colorado ranch. Ralph’s dad fathers him in unparalleled ways, and this book offers real life lessons that are eternally rich. Few books have spurred more conversation with my son about what it means to be a boy and, in time, become a man.

Man of the Family by Ralph Moody (book two of series)

In the wake of his father’s tragic death, Ralph is thrust into a leadership role in his family at the age of eleven.  The initiation and and validation of young Ralph is a priceless on-ramp to travel the same realities of coming-of-age with your son.

The Home Ranch by Ralph Moody (book three of series)

For a dollar a day, twelve year-old Ralph is hired as the youngest cowboy to work a Colorado cattle ranch in the shadow of Pikes Peak.  Ralph delicately navigates the unchartered waters of work and relationships with one foot in boyhood and the other in manhood.  Becoming a man at too young an age is the storyline of most men I encounter.  This book is a context for those raw and real conversations with a son to wonder what it looks like to embrace boyhood and not rush the process of becoming a man, yet still be open to God’s rich initiation and validation that every boy longs for and is created to experience.

The Chronicles of Narnia by C.S. Lewis

The Adventures of Huckelberry Finn by Mark Twain

The Adventures of Tom Sawyer by Mark Twain

Far North by Will Hobbs

Downriver  by Will Hobbs

‘Til the Cows Come Home by Jodi Icenoggle

We read this book time and time again when my son was just a little guy.  It’s excellent for those earliest years of a child leaning into the affection of a father.  Though this story is set in the wild west, its foundation is an ancient Hebrew folktale.  The Kingdom lessons are timeless.  It’s about a father and a daughter, so this is excellent for all your kids. (The “Great Books to Read with Your Princess” list is in the works!)

The Carpenter’s Gift by David Rubel

You Are Special by Max Lucado

This is the best Bible we’ve found to engage the hearts of young boys and young warriors.  Filled with illustrations that have captured the imagination of my son.

Remember the old adage, “Don’t judge a book by its cover.”  Boy, that sure holds true for this one.  It took me years to get over the cover alone.  But hidden in these pages is rich gold.  It was crafted over decades in the early 20th century by a mom who was passionate about finding a way to bring the whole of Scripture to the heart of her kids in a way that was both accessible and transcendent.

The Jesus Storybook Bible: Every Story Whispers His Name by Sally Lloyd Jones

Most children’s translations of the Scriptures are painful.  It is rare to find a translation of the Greatest Story Ever Told that captures the heart, preserves the mystery and wonder, and cultivates the imagination.  Here’s where we started with our son’s introduction to the Scriptures after much trial and error.  It’s become a timeless treasure.

The Fellowship of the Ring by J.R.R. Tolkien

The Pushcart War by Jean Merrill

The Hobbit by J.R.R. Tolkien

The Lion’s Paw by Robb White

My Side of the Mountain by Jean Craighead George

The Dangerous Book for Boys by Conn Iggulden and Hal Iggulden

These are our favorite treasures we’ve been given by the Father so far.  We hope to share others as they come along.

The Central task of education is to implant a will and facility for learning; it should produce not learned but learning people. The truly human society is a learning society, where grandparents, parents and children are students together. – Eric Hoffer