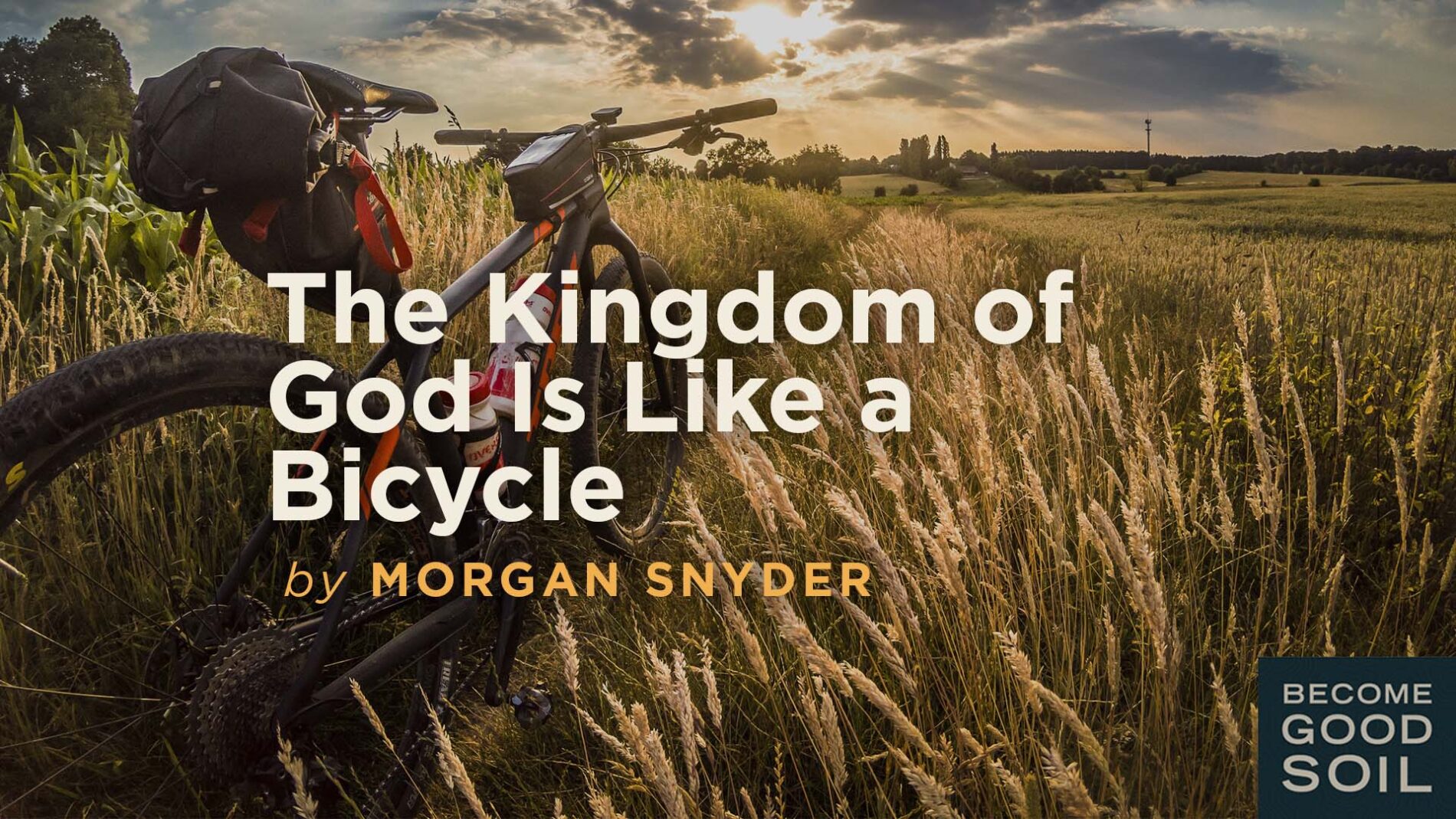 The seizure was shocking enough. My youngest brother, known by us all as Lucky Lance, was the luckiest one of us all, at least up until then. He had the great hair while the rest of us brothers went prematurely bald; he had the beautiful wife, the six-figure income from work he loved, and an inviting, easy-going nature that refreshed everyone he met. His great looks and irresistible smile won him the name “eye candy” among the older ladies at his office. With a perpetual light in his eyes, he was always laughing and making others laugh. He was indeed the joy-center of our family.

It was a sudden seizure that changed everything.

When he was rushed into emergency surgery shortly after to remove a massive brain tumor, we were shocked, but clung to a deep belief that this horrific specter would somehow vanish. Lucky Lance, the master fly-fisherman, would surely be back, waist deep in a mountain stream, his eyes sparkling playfully, cracking a sly joke about the close call; and all would be well again.

Huddled in an awkwardly small and sterile family waiting room, we (Lance’s wife, his sister, two brothers—me included—and our mom and dad) did our best to mitigate the foreboding and pass the time, praying ceaselessly and hoping for the best.

Then came the neurosurgeon to give us a mid-procedure update on Lance’s condition.

I could see his lips moving, but the words registered with a strange delay, like the shockwave of a roadside bomb you never saw but sends you hurtling, silently and in slow motion, into the sky:

It’s worse than we thought.

He may never talk again.

He may not know who you are.

He has one year to live.

It was at the moment of the surgeon’s brief report that I literally watched the strength pour out of my dad. He slumped into his chair, exhaling what remained of his breath.

That was five years ago, and until this week, he had yet to gain it back.

It’s been brutal to watch my dad’s quiet long-suffering. The brokenheartedness of losing his son—first overnight as he had been prior to the surgery, and then losing him a second time 18 months later as he was post-surgery, golden-hearted and yet physically and cognitively compromised—manifested in my dad’s body with tremendous physical affliction. Chronic nerve pain developed in his hands and feet, leading to chronic sleeplessness, which further sapped him not only of his strength, but also of his desire and ability to do the things he used to love, especially biking and running.

But something happened today, something inexplicable.

Today we witnessed on earth as it is in heaven.

And it came through a bike.

Not just any bike. A Specialized Turbo X. The latest revolution in technology offering a pedal assist, giving access to adventures and challenges that just yesterday were out of the question. More importantly, it was a gift personally orchestrated for my dad by a good, good Father in Heaven through the hands and heart of His people.

A few weeks prior, I’d put a call in to my friend, Gil, leader of the team at Wheat Ridge Cyclery and a sage in the Kingdom, merely for brotherly advice before I pulled the trigger on a big purchase. Gil listened, then lovingly put together a way better solution than I had come up with to outfit my dad with hope on wheels.

He rattled off a list of what he and his shop could put together, offering a sacrificially generous price, and said,

I was knocked off my center. Such unlooked-for love, sacrifice, and heroism, all on an ordinary Tuesday morning.

Gil simply said in response to my awe,

Let’s get your dad riding again. It’s what we do.

I could feel Heaven behind his words. “It’s what we do.” It’s what God does, restoring his people, binding up broken hearts, renewing strength. But he has chosen to do it mostly through willing, yielded, rare Kingdom people like Gil who, deep in their being, have given consent to God for his Kingdom to move through them.

By God’s grace, the bike arrived at my parents’ house on the final day of mail delivery during our Thanksgiving visit with my family in Pittsburgh.

Eagerly, I opened the box, assembled the bike, and dialed it in, then waited for my dad to come home for lunch. When he pulled into the driveway, eight of us were in the front yard playing a game of touch football. I ran to the garage, retrieved the bike, and wheeled it up to my dad. Instantly the horde of grandkids and adult kids swarmed around him and his new pedal assist Turbo X. Without hesitation, he jumped on, disregarding the dress pants and pressed shirt under his big down jacket, and soared up the driveway.

I’ll never forget that laugh. Effortlessly turning left at the top of the driveway onto a busy street, he shouted over his shoulder to us, his smile dazzling, “I’ve been born again!”

And just like that, he vanished beyond the bend for his test ride.

I thought surely he’d be back in minute or two. When 10 minutes passed with no sight of him, I began to wonder what had happened. I sure hope he didn’t wrap that thing around a tree on his maiden voyage. Then it dawned on me…What if he had? What a great way and great moment to cross over into Eternity.

But return he did. And so did the ageless smile that had long been lost, as he exclaimed, “I rode straight up to the top of Falconhurst!” He hadn’t done that in 25 years.

We rode every day of the rest of our visit. The second day, we headed to a nearby park with paved hills as well as wooded slopes that boast lots of single track. I was committed to staying on the roads—my dad is in his 70s to begin with, not to mention the physical and emotional afflictions of the previous five years; I surely didn’t want to push the envelope on a good thing. (Can you hear my playing it safe? Good grief.) Three times, my dad suggested we drop off into the single track and grab some dirt. Three times, I benevolently declined. He was already out ahead of me and his grandkids; try as we might, we couldn’t catch him on the Turbo X with the pedal assist.

Then, on a final climb even as he rocketed up the paved hill, he abruptly turned right and ducked onto the single track! Dismissing my reservation (thank God), my dad went for it—no permission needed. Laughing and wiping tears away, I wondrously followed him onto the single track, a gaggle of grandkids following me.

My dad led us that afternoon, trail after trail through that hardwood forest of western Pennsylvania, in the long light of the late afternoon winter day.

And during those hours, we wanted for nothing. Nothing but more of this. More of God.

Of God with us. Of God among us.

My dad was young again. Fear and despair had melted off him; he was becoming younger and stronger with every pedal stroke. As quickly as I’d seen his strength leave him five years before, I was witnessing the miracle of its return. Tears pour out as I remember and write this now. The Kingdom of God came to us. A rescue. An intervention. If there was ever an incarnation…this was it. Our Liberating King had invaded this world by hiding himself in a bicycle.

Even Jesus inverts the question. Or better said, He offers a response that is bigger and better than an answer. To the ache and longing in our desire to understand the Kingdom, He responds by offering us stories and mythic pictures of true spiritual reality.

a mustard seed—the least of all seeds, which grows to surpass all others. (Matthew 13:31)

treasure hidden in a field, which a man found and then hid; compelled by joy, he sold all he had in order to buy that field and secure the treasure. (Matthew 13:44)

a merchant seeking beautiful pearls, and when he had found one pearl of great price, he went and sold all that he had and bought it. (Matthew 13:45-46)

a dragnet that was cast into the sea and gathered some of every kind. (Matthew 13:47)

The Kingdom of God is so rich and so real it eludes our ability to contain it with words.

But when it comes, we recognize it and it enthralls us. More than anything has ever enthralled us before.

Today, I witnessed it with my own eyes.

The answer to what I want more than my ability to even name it. I experienced the Kingdom Among Us.

There have been times when I think we do not desire heaven; but more often, I find myself wondering whether, in our heart of hearts, we have ever desired anything else.

Experiencing the Kingdom enveloping us today took me back to the brilliant movie The Shawshank Redemption. It is the story of a man, Andy Dufresne, who is wrongly accused of a horrific crime and spends years imprisoned in Shawshank.

One day, many years into his sentence, Andy cunningly hijacks the warden’s office in a heroic act of defiance in order to play over the loudspeaker a recording of a gorgeous Italian Opera. Of the moment the magnificent music floated over the entire prison, Andy’s friend, Red, observes,

I have no idea to this day what those two Italian ladies were singing about. Truth is, I don’t want to know. Some things are best left unsaid. I’d like to think they were singing about something so beautiful, it can’t be expressed in words, and makes your heart ache because of it. I tell you, those voices soared higher and farther than anybody in a gray place dares to dream. It was like some beautiful bird flapped into our drab little cage and made those walls dissolve away, and for the briefest of moments, every last man in Shawshank felt free.

an Italian song so beautiful that it sets every captive free.

a bicycle bestowed upon a tired and weary man.

And in riding, became young again—strong, alive, and free.

And for the briefest of moments, as first fruits of what will one day come in full, that bike did for each of us what it did for him.

We were all free.