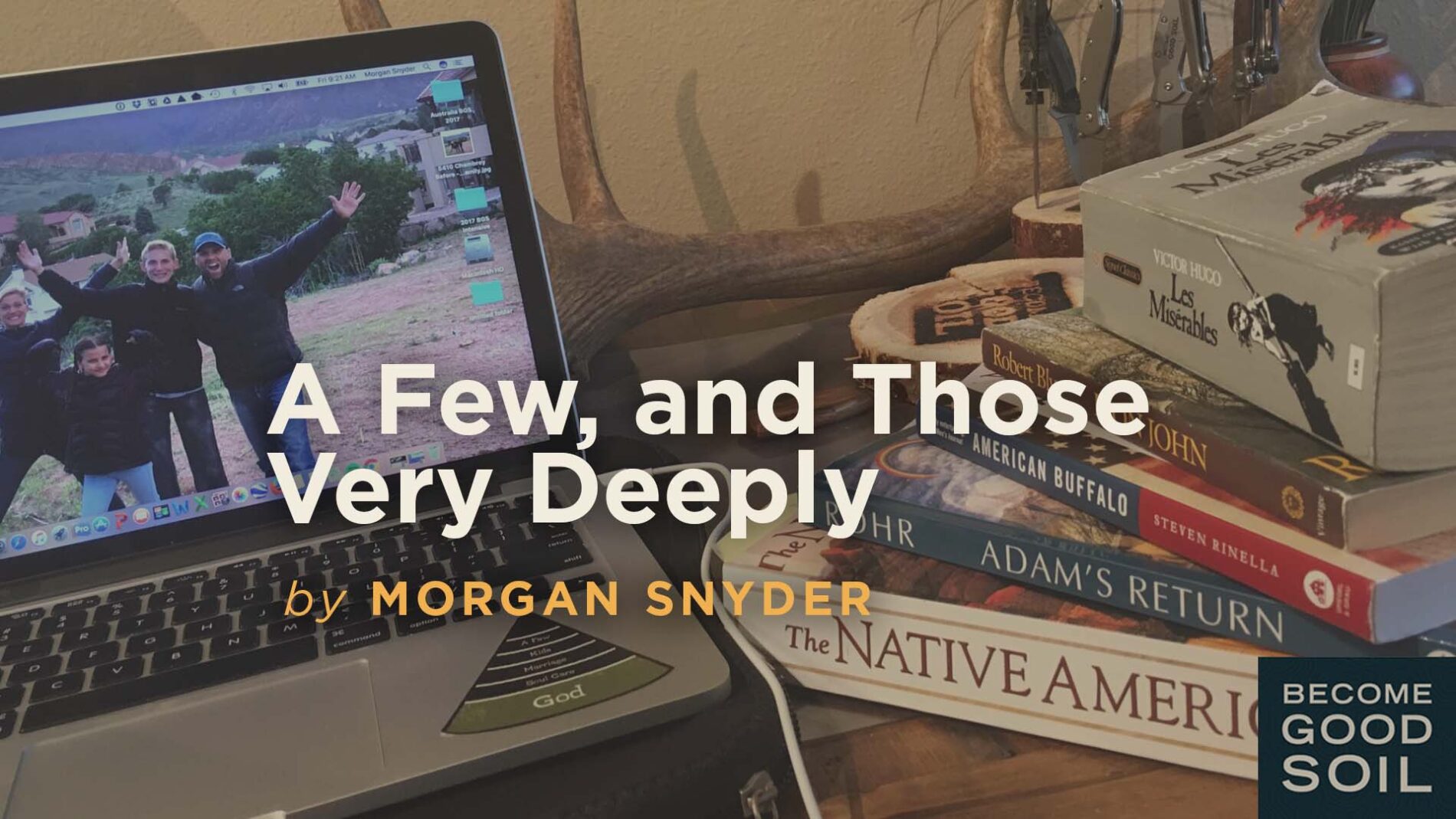 “What books do you recommend reading?”

“I recommend a few. And to read those very deeply.”

The refreshing counsel of a sage.

We are all immersed in a culture bombarding us with content. Some of it very good content.  Perhaps to truly nourish our souls, it is not only good content we need, but less of it, and that content to be ingested, savored, considered very slowly and deeply.

As an apprentice in the ways of God’s Kingdom, I am a voracious reader and learner. But I also sense one of my Kingdom assignments is to curate and distill soul-centered content from far and wide, from which the hungry few might feast and be strengthened.

Part of that process, I believe, is to regularly recommend a few of the books I’ve dived into, pondered, and been deeply challenged and nourished by.

Particularly in the summer season, I make it a regular spiritual practice to pause more, linger more in a good reading of great books. Here are several for your consideration:

“Introducing one of the most famous characters in literature, Jean Valjean—the noble peasant imprisoned for stealing a loaf of bread—Les Misérables ranks among the greatest novels of all time. In it, Victor Hugo takes readers deep into the Parisian underworld, immerses them in a battle between good and evil, and carries them to the barricades during the uprising of 1832 with a breathtaking realism that is unsurpassed in modern prose.

Within his dramatic story are themes that capture the intellect and the emotions: crime and punishment, the relentless persecution of Valjean by Inspector Javert, the desperation of the prostitute Fantine, the amorality of the rogue Thénardier, and the universal desire to escape the prisons of our own minds. Les Misérables gave Victor Hugo a canvas upon which he portrayed his criticism of the French political and judicial systems, but the portrait that resulted is larger than life, epic in scope—an extravagant spectacle that dazzles the senses even as it touches the heart.”

At 1466 pages, contending with its length is not for the faint of heart. But this brilliant novel is worth its weight in gold, truly unparalleled. The transcendent narrative plunges into the depths of the human soul. To see evil and goodness warring for the souls of men; to glimpse the heart of a good king, of a good father; to watch redemption in the face of personal and unspeakable evil; to be reminded what God is really like—it could save our souls.

“He did not study God. He was dazzled by Him.”

“In passing we might say success is a hideous thing. Its false similarity to merit deceives men. To the masses, success has almost the same appearance as supremacy. Success, that pretender to talent has a dupe—history.”

“Can human nature be so entirely transformed inside and out? Can man, created good by God, be made wicked by man? Can the soul be completely changed by its destiny, and turn evil when its fate is evil? Can the heart become distorted, contract deformities and incurable infirmities, under the pressure of disproportionate grief, like the spinal column under a low ceiling? Is there not in every human soul—was there not particularly in Jean Valjean’s soul—a primitive spark, a divine element, incorruptible in this world and immortal in the next, which can be developed by goodness, kindles, lit up and made to radiate, and which evil can never entirely extinguish?”

“There are men who work for the extraction of gold; he worked for the extraction of pity. The misery of the universe was his mine. Grief everywhere was only an occasion for good always. Love one another. He declared that to be complete; he desired nothing more, and it was his whole doctrine.”

“Steven Rinella won a lottery permit to hunt for a wild buffalo in the Alaskan wilderness. In a book that combines adventure with a quirky blend of facts and observations about history and the natural world, Rinella takes us across the continent—from the Bering Land Bridge, where scientists search for buffalo bones amid artifacts of the New World’s earliest human inhabitants, to buffalo jumps where Native Americans once ran animals over cliffs by the thousands. A captivating narrative of environmental and historical significance, Rinella’s tale is a fascinating examination of an animal that has haunted the American imagination for centuries.”

“[We must be clear between when we are] being sold the illusion of something rather than the thing itself.”

Good Kings come in all shapes in sizes. The story of Jayber Crow is an intensely thought-provoking and enticing story that will challenge the soul of a man if he is willing to take the risk.

“Jayber Crow, born in Goforth, Kentucky, orphaned at age ten, began his search as a “pre-ministerial student” at Pigeonville College. There, freedom met with new burdens and a young man needed more than a mirror to find himself. But the beginning of that finding was a short conversation with “Old Grit,” his profound professor of New Testament Greek:

“You have been given questions to which you cannot be given answers. You will have to live them out—perhaps a little at a time.”

“And how long is that going to take?”

“That could be a long time.”

“I will tell you a further mystery,” he said. “It may take longer.”

Eventually, after the flood of 1937, Jayber becomes the barber of the small community of Port William, Kentucky. From behind that barber chair he lives out the questions that drove him from seminary and begins to accept the gifts of community that enclose his answers. The chair gives him a perfect perch from which to listen, to talk, and to see, as life spends itself all around. In this novel full of remarkable characters, he tells his story that becomes the story of his town and its transcendent membership.”

“As I have read the Gospels over the years, the belief has grown in me that Christ did not come to found an organized religion but came instead to found an unorganized one. He seems to have come to carry religion out of the temples into the fields and sheep pastures, onto the roadsides and the banks of the rivers, into the houses of sinners and publicans, into the town and the wilderness, toward the membership of all that is here. Well, you can read and see what you think.”

“To love anything good, at any cost, is a bargain.”

“Faith is not necessarily, or not soon, a resting place. Faith puts you out on a wide river in a boat, in the fog, in the dark.”

Much has been written on masculinity. Yet few other resources have helped to shape me more and to help me identify the core essence of what God is inviting me to shepherd in the initiation of my son into manhood. The Father has used this book to allow hope to rise in seeing how I am being initiated alongside my son, both of us recovering lost treasures and becoming men who, like Paul, can one day say with confidence, “Now that I have been through my initiation, I am ready for anything, anywhere.”

“In the larger-than-life people I have met, I always find one common denominator; in some sense, they have all died before they have died. At some point, they were led to the edge of their private resources, and that breakdown, which surely felt like dying, led them into a larger life…Instead of avoiding a personal death or raging at it, they went through a death, a death of their old self, their small life, and came out the other side knowing that death could no longer hurt them.”

“For some reason young bull elephants were acting strangely out of character—antisocial and aimlessly violent; they were stomping on VWs, pushing over trees for no reason, and even killing other small animals and baby elephants. Park rangers came in to study the problem and, in the course of their investigation, they discovered that there were no older bull elephants in that area…They brought in some older bull elephants…Things soon turned to normal once the elders started operating as elders.”

The Native Americans An Illustrated History

It has been said that one of the most effective ways to prepare for the future is to become a student of the past. Did you know there were over 2000 languages spoken in America before a white person ever entered the land?

“Dispossessed of their ancestral homelands by successive invasions of Europeans, the first real Americans have long been cloaked in a veil of myth and legend that has hidden from us the true richness and diversity of Indian civilizations and cultures. This newly unfolding legacy represents an unparalleled body of untapped wisdom, which even now provides fresh perspective on modern problems. The astonishing reality of Indian history, presented here for the first time from the perspective of native Americans, will deepen our understanding of what it really means to be an American.”

Presented in this great work from the perspective of the native American, it contains a vast treasure chest of insight which serves to shape, mature and integrate the masculine soul.

“[Spirituality] pervaded all of life and provided a sense of context. Everything in the world had its spiritual component and every action had to be accompanied by proper ritual. It was not enough to accept a new plant or artifact; one had to know the exact ritual that applied to its special characteristics in order to be able to use it effectively… The ritually established connections of crops to the larger cosmos of seasonal cycles changed their way of life, but it was a [spiritual] rather than agricultural development.”

“The Way of the Essentialist isn’t about getting more done in less time. It’s about getting only the right things done.  It is not  a time management strategy, or a productivity technique. It is a systematic discipline for discerning what is absolutely essential, then eliminating everything that is not, so we can make the highest possible contribution towards the things that really matter…

Essentialism is not one more thing – it’s a whole new way of doing everything. A must-read for any leader, manager, or individual who wants to do less, but better, and declutter and organize their own their lives, Essentialism is a movement whose time has come.

“Basic value proposition of Essentialism – Only when you give yourself permission to stop doing it all, stop saying yes to everyone, can you make your highest contribution toward the things that really matter.”

“The way of the essentialist is the relentless pursuit of less but better.”

For earlier recommendations go to the Books section in Dig Deeper