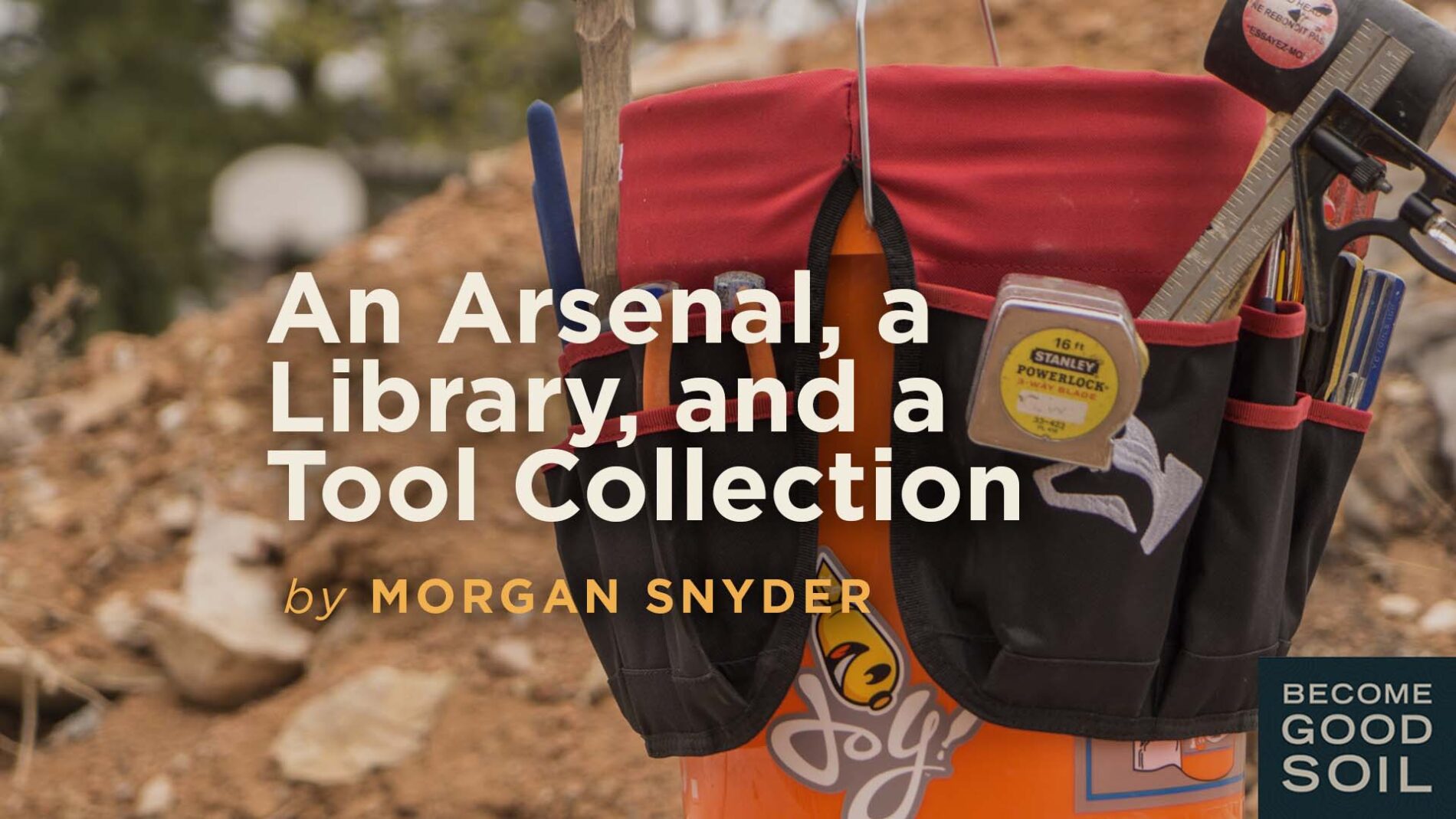 This was no place for an Xbox. Or any digital device for that matter.

Though there were no “danger” signs posted, the heavy equipment, hum of the air compressor, and repeated firing of the nail gun made it clear: something powerful was under way, and as with every instance of power, you’d better be attentive unless you want to get hurt. We were part of an active construction site.

The crane truck had just left, having hoisted the roof trusses to the second floor. The day’s primary tasks were clear: dig 36-inch deep holes for concrete footers, dozens of four-foot by eight-foot plywood sheets through the framed walls, and, one way or another, get them up to the second floor. Then, by sunset, cut and lay out the plywood sheeting and secure it with nail gun and glue in the hopes of having a second-story floor.

We got to work, a handful of fathers and sons. Sweat and stories ensued. The fathers sharing stories of the exposure they did (or didn’t) have as young men to this type of hard and holy work. And the young men, with shovels, picks, and tamping bars, shared their own sorts of stories as well. As is the nature of hard work and young men, laughter mixed with just the right amount of griping and vain attempts to come up with shortcuts.

For neighborhood dog walkers or any other passersby, the scene probably looked like just another work day within the slow and steady process of residential construction. But on the level of the soul, these were the rough-hewn ingredients of another round of masculine initiation.

The general contractor gets it: he doesn’t ultimately build homes—he builds people.

And the atmosphere he creates touches the hearts and hands of everyone who gets involved in his work. As Francis Schaeffer suggests, for the soul of a man who has been given over to God and his Kingdom, there are simply no little people, no little places, and no little things. When the Kingdom is at hand, all manner of things become sacred, infused with the Divine in a way that cannot be explained in material terms. Through the blend of hard work, story, complaining, and play, something was being passed from older man to younger man; an invisible process more substantive than the construction project was under way.

Much to their relief, lunch break came earlier than the boys anticipated. We gathered around a roaring campfire fueled by scraps of framing material. And in that place, we were all wondrously equal. Men, young and old, burritos, fire, dirty hands, splinters, and stories.

In time, to the surprise of the boys, the conversation shifted, and the fathers moved to bestow an unexpected gift upon them: the equipment for the masculine soul.

First came the Joy Buckets: five-gallon Home Depot buckets with tool pouches conveniently fitted around their rims. Next came pocket knives, bestowed one by one, son by son. Then came books. One for each boy. Each unique. From an older man to a younger one, each naming why this book held a treasured place in his story.

For a few moments, we inhabited what the celtic Christians named as a “thin place,” a place where the veil between the eternal and the temporal, the heavens and the earth, almost entirely dissolves. As Dallas reminds us in The Divine Conspiracy, “The most important things in our human lives are nearly always things that are invisible.” And for this moment, through the grace of God, we saw Reality as it truly is. In the context of hard work, transformational stories, and masculine love, God the Father was investing in the process of initiation for each of these young men within their quest to become the man God meant when he meant them.

Over the last few decades, in journeying into the stories of men as well as in participating in my own initiation as a son and as a man, I’ve observed several key ingredients that seem universal to the process of masculine initiation.

Every warrior needs weapons. Every student needs books. Every craftsman needs tools. Each of these realties, infinitely unique in its expression for each man, offers hidden treasures waiting to be awakened and nourished in the soul of the boy. The fruit of each man immersing himself in his particular books, skilling himself in his particular tools, and learning to wield his particular weapons in love is universal: pervasive inner transformation that forsakes the mere self-life and yields a capacity to bring harnessed strength on behalf of the Good.

Most initiated men I encounter have a collection of well-read and cherished books. The books a man values speak volumes about the formation of his soul. Though the subject matter may vary greatly, when I meet a man who has taken the time to learn, think deeply, and explore the inner and outer world with curiosity, his deliberation begets a consent in my own soul to risk and devote myself to deeper curiosity, thought, and imagination. His posture as a learner spurs my own intention to be a student of things good, true, and beautiful.

Most initiated men I encounter have a treasured collection of well-worn tools. Tools speak of agency and competence and reflect an essence of masculinity: deliberate action and skilled engagement. Our contemporary culture often values convenience, specialization, and outsourcing over physical work and agency or general competence. Learning, over time, how to wield a solid collection of tools is a path to reseating confidence and fierce mastery within the masculine soul.

Most initiated men I encounter also know how to wield power for the sake of the Good. The masculine soul was created to provide in many forms. To heroically offer strength in love. To defend the defenseless and protect all that needs protecting. To spend himself in a worthy cause. To wield every weapon necessary to see that evil and devastation do not have the final word. A weapon is a terribly powerful thing. An initiated man has the ability and resolve to wield power only for the good; not power over, but power for; power in the service of love. It was Chesterton who said, “The true soldier fights not because he hates what is in front of him, but because he loves what is behind him.” A pocket knife is the beginning of the process of initiation regarding the peril and possibility of power. To bestow a pocket knife on a young man—and to train him to wield it in love—is cause for celebration.

The tools, books, and weapons no doubt vary in the specificity of every man’s story. Yet the essence of the thing and its symbolic role in masculine initiation cannot be overstated.

Today was only a beginning for these young boys. But I can assure you, as the fathers observed the light in their sons’ eyes, the dignity and delight reflected there, the world was being changed. This was no ordinary construction site—it was a context for bestowing masculine goodness and identity.

It doesn’t take much.

A few buckets, books, and knives, and perhaps a little bit of belief that the boy needs the man to guide him through initiation. And no doubt it takes a good bit of love and a willingness to sacrifice whatever it takes to ensure that the next generation of men will one day stand on our shoulders. They will be better, more wholehearted men than we have become. They will love their women with strength, tenderness, and sincerity. Their families and tribes will be healthier and bring an ever greater good to those in need. Families will gather around dinner tables and linger over stories. Restoration will surpass devastation. Wrongs will be righted. And slowly, in unnamed ways, the Kingdom of God will flow ever deeper, eroding the kingdom of this world and the misuse of power.

Pause with me for a moment.

Call to mind the current condition of your tool collection. Picture what it looks like. Pay attention to what rises within you.

Call to mind your current library. Pause. Linger for a moment.

Call to mind your current arsenal.

Holy Spirit, what are you desiring to reveal to my soul?

I want to suggest that whichever of the three holds the most pain might be the trailhead of invitation to venture deeper, to be curious what your Father might be up to with an invitation into more.

It was said of Winston Churchill in his role as a father that no man had become more of what he had not himself received. What if we became what we most wanted to receive? What if the next generation became fathers because they were fathered with wisdom and devotion, perhaps by men who themselves lacked the privilege of receiving such fathering in the parallel days of their youth? It is precisely this sort of legacy that will manifest through consenting to the process of masculine initiation, through choosing the daring path of becoming an apprentice of the King and recovering the ancient way.(1)

A collection of tools, a collection of books, and a collection of weapons. To invest in this for the soul of a young man will change the world. Let Love guide you. Your Father is hard at work. Ask him what he wants to do for the boy in you and for the boy in your kingdom, through you. One of the great tasks of masculinity is to move through the grief over what we have not received and transition into risking confidence in our Father’s limitless capacity to provide generously even still. And in turn we can become the kind of men who confess in quiet confidence, through word and deed, because of my Father, “in me there is no lack.”(2)

Through God’s personal and profound abundance, we can become the kind of kings and the kind of fathers to whom he is delighted to entrust his Kingdom.

The greatest weapon in history’s fight against evil is the soul of a wholehearted man. Let’s risk together. With a tool collection, an arsenal, and a library, let’s venture deeper with our Father and restore what’s been lost, stolen, and surrendered.