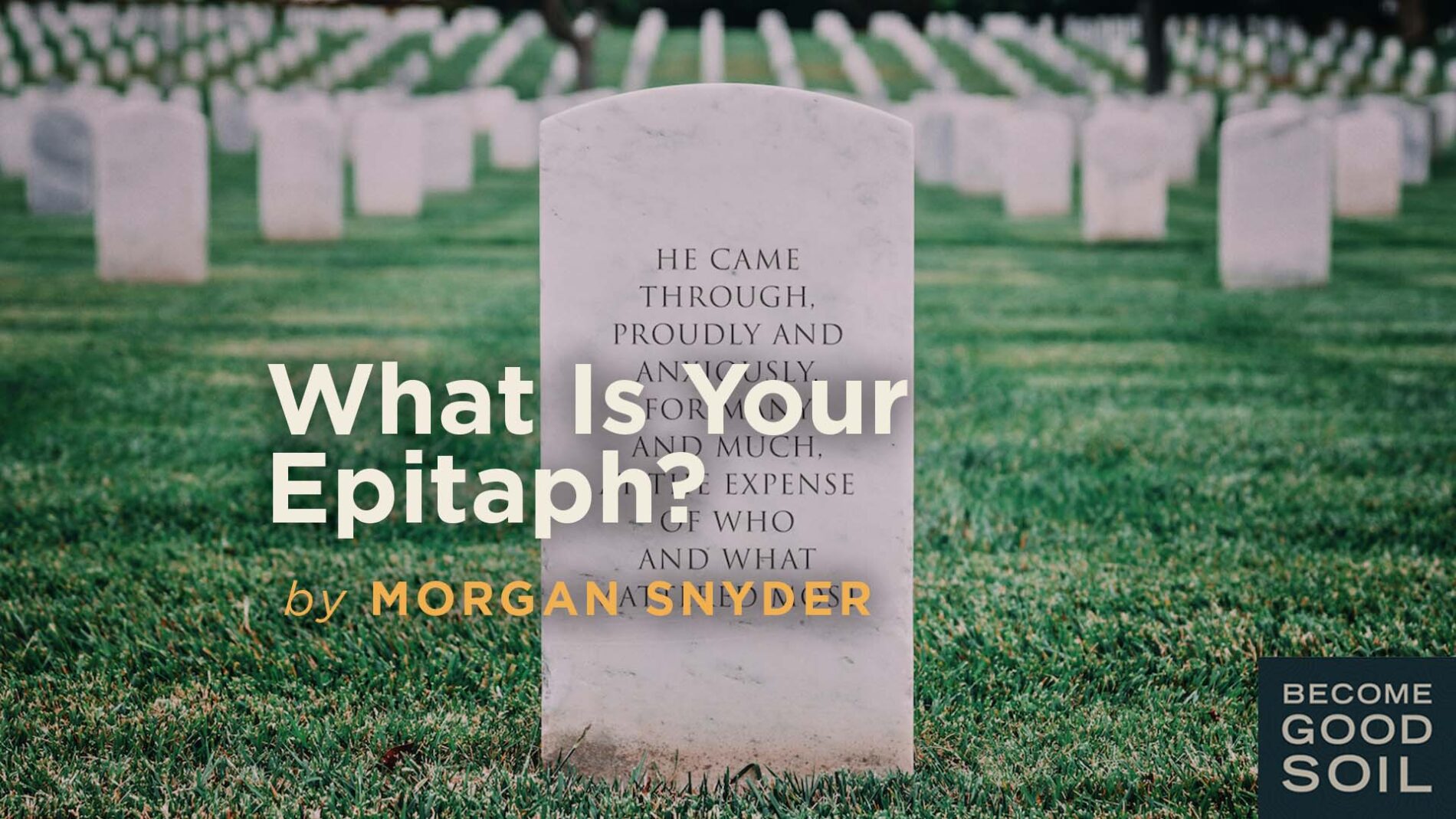 Within the span of a single month last year, the world lost too many really good men. A few were elders; their crossing over was filled with sorrow but also with joy. As Paul taught regarding the life of David, these elders had fulfilled God’s sacred purpose in their generation and now awaited the restoration of all things (Acts 13:36).

But at least one man was cut short of his time.

Years ago, I reached out to thank Jason for his contribution to my initiation; that connection planted seeds of a friendship. Last year, he took his own life. It broke my heart.

When I received the news of his death, I was shocked. I sat stone-still for several moments, watching specks of dust shimmer in the winter light cascading through our southern windows. Then, as my shock turned to pain, I knew I had to get outside. Though it was cold, I found a patch of earth tucked in from the wind, and with the sun on my face, I fell apart.

I can’t remember the last time I couldn’t hold it together. I’ve become long accustomed to soldiering up and doing hard things. I’ve been rewarded for it for decades. Yet on that day, something in me finally broke open.

There was much to process. The terrible loss of Jason’s life. The excruciating pain his wife and two young children will have to endure. The gaping hole left in the world from his death.

But there was something else.

And in the belief that sharing in vulnerability strengthens our community, I want to share the picture that came to me: it was a vision of my own funeral. Or better said, a vision of the funeral of a version of the man I have become and who I’m afraid will have the final word on my story.

In this scene, I saw the faces of those closest to me: my daughter, my son, and my wife. All the other faces were out of view. I sensed that someone was speaking words—offering a eulogy regarding the impact of my life. And then the picture shifted to a grave marker and the epitaph carved upon it:

The words were alarming, yet so very true of an aspect of the man I have become. I let them find their way into me, again and again…

for many and much,

at the expense of

who and what mattered most.

I know this man inside of me. I’ve lived with him all my life. I’ve served him, strengthened him, matured him, and demanded that his effort provide me some version of peace, safety, and validation.

And he has let me down.

That afternoon, I wept over the death of Jason. But I also wept over the man I have, in part, become, a man who anxiously and proudly comes through for many and much at the expense of who and what matters most.

It was then that the Father kindly and confidently reminded me that this anxious, proud, self-sufficient man is not the only truth. There is another man alive in me as well: a less mature but more true man.

There is a true man within me who is being initiated by a Good Father and has set his heart on things above, not on the things of the world’s system. A man in me who loves who and what he sees in the mirror. A man who is growing in his capacity to receive God’s love and to love God and others as himself in the overflow of that love.

Both men are within me.

And the question I have is this: which man will have the final word on my life?

Almost two millennia ago, the apostle Paul articulated this crux of the human experience: we have two selves within us, both contending for primacy.

As I continued to reflect, I realized I had come to another fork in the narrow road of the masculine journey. It is my choice. There are two men within me with very different motives, different fuels, different destinations, and different relationships.

And there are two potential epitaphs.

Which one will ring true at the end of my life?

In the weeks that followed, I asked other trusted, like-hearted men this question:

How about you? Who is the impostor within? What would be the epitaph for your false self?

Each courageously took time to form his own version of an epitaph for his self-life. And with their blessing, I have shared some of them below:

He finally made it happen.

He reached the goal.

He pushed through every obstacle, including the ones he loved.

He left an indelible mark…on his couch.

He was smarter and better than everyone else.

He was untouchable, able to push everyone away to not get hurt again.

He died rich and alone and empty inside.

He pursued the self-life and got results,

but they were never enough.

Never good enough and quite frustrating,

Even infuriating, below the water line.

Maybe the results impressed some from a distance, but never those who mattered.

A costly game he played…

He always felt care for his heart was synonymous with selfishness.

He was paralyzed to step into the octagon in times of need.

Unfathered orphans and a broken widow are his legacy.

Who described the frontier of God’s grace

Only from his view at the fenceline.

He was a Diamond travel member,

Made double-digit moves across the country,

but ignored his elderly Dad,

Held unforgiveness tight on his heart

and brought revenge for those who crossed him.

He was distracted, never present, on his phone.

He loved with condition, ignored the present, and his famous last words were, “I don’t have time. Maybe someday.”

His wife thought she married a man, but learned later he was but a boy.

He rushed and hurried and stayed busy, because he prized relevance over Reverence.

He graduated with honors from the “Nice Guy Academy.”

Master Illusionist – He had it all in control

Strove to “make it happen” by himself

He tore the skin off his own hands

To win the approval and applause of those he didn’t know,

Whilst neglecting those he should have loved.

He earned his way.

At the expense of relationships he said were dear to him.

He died all alone.

(If you’re viewing on a computer, here is the video of the grave marker collective.)

Here is the good news: the epitaph that describes our false self need not be the final word over our lives. There is another way. The way of apprenticeship to Jesus, the way of pervasive inner transformation.

Instead of denying the reality of the two selves who vie for our allegiance, the Kingdom of God places our hidden inner world on center stage. The Spirit of Jesus teaches us that God’s love comes to expose the false self in order resurrect the true.

As Paul wrote to the followers of Christ in Ephesus, “everything exposed by the light becomes visible—and everything that is illuminated becomes a light” (Eph. 5:13 NLT). Through bringing our false selves into the light of God’s love, God transforms them from sources of shame to sources of strength, markers of orientation along the ancient path of recovering the True Man within.

David Brooks, in his book The Road to Character, shares candidly his own version of the false self at work with him:

“I’m paid to be a narcissistic blowhard, to volley my opinions, to appear more confident about them than I really am, to appear smarter than I really am, to appear better and more authoritative than I really am. I have to work harder than most people to avoid a life of smug superficiality. I’ve also become more aware that, like many people these days, I have lived a life of vague moral aspirations—vaguely wanting to be good, vaguely wanting to serve some larger purpose, while lacking a concrete moral vocabulary, a clear understanding of how to live a rich inner life, or even a clear knowledge of how character is developed and depth is achieved.”

He goes on to explain,

“We live in a society that encourages us to think about how to have a great career but leaves many of us inarticulate about how to cultivate the inner life. The competition to succeed and win admiration is so fierce that it becomes all-consuming. The consumer marketplace encourages us to live by a utilitarian calculus, to satisfy our desires and lose sight of the stakes involved in everyday decisions. The noise of fast and shallow communications makes it harder to hear the quieter sounds that emanate from the depths. We master the skills required for success, but that gives little encouragement to humility, sympathy, and honest self-confrontation, which are necessary for building character.”

Brooks suggests that “resumé virtues” may contribute to short-term success, but eulogy virtues are the ones that matter in the long run. “They’re virtues that get talked about at your funeral, the ones that exist at the core of your being—whether you are kind, brave, honest or faithful; what kind of relationships you formed.”

Here are a few questions that might help you take another step along the narrow road:

Who is the man in you that is no longer working?

What is on his epitaph?

What do you observe about his energy, his motive, his fears, his goals?

Take the time to write out his epitaph.

Then consider, What is the next step for you? How is the Father beckoning you to crucify this false self? How is Father calling forth the true man God meant when he meant you?

And finally, what would you love the epitaph to be for your True Self? In a few words or sentences, what description of your impact would mean the world to you?

Entering the Kingdom means receiving the invitation to the with-God life and entering a grace-fueled process of taking off the old self and becoming the New Man in the spirit and nature of Jesus, our brother. It’s a prevailing story of inner transformation and deepening access to and union with a life, a source, and a person beyond ourselves. Receiving this new way of being human frees us from being at the center of our own story and gives us a safe place to mature in love. It invites us to mature in the life-giving perspective that the life of the Creator of creation is alive and well, is authoring and perfecting a story, and has destined a unique place and sacred purpose in our participation.

In time, I saw two men and two epitaphs. These two men, the false man within me and the true man, have different motives, different fuels, different destinations, and very different relationships. And seeing them both so clearly, I realized I had come to another fork in the narrow road of the masculine journey. It is my choice. Will the epitaph that described my false self  be the pronouncement at the end of my days, the summation of who I was and what I offered? Or will it be said that I was a man who resolved day by day and decade by decade to put the self-life to death in order that the true man, connected to God, could rise and live a life of loving and being loved?

Will I choose to crucify the energies of self-saving, self-sufficiency, and self-deception in order to receive the intimate resurrection life of Christ acting with me to respond to God’s initiation and learn his heart and his Kingdom as he truly is?

“Every moment we make in response to God has a ripple effect, touching family, neighbors, friends, community.”
– Eugene Petersen, The Message

(1) music bed in epitaph video provided graciously by the Pattersons.