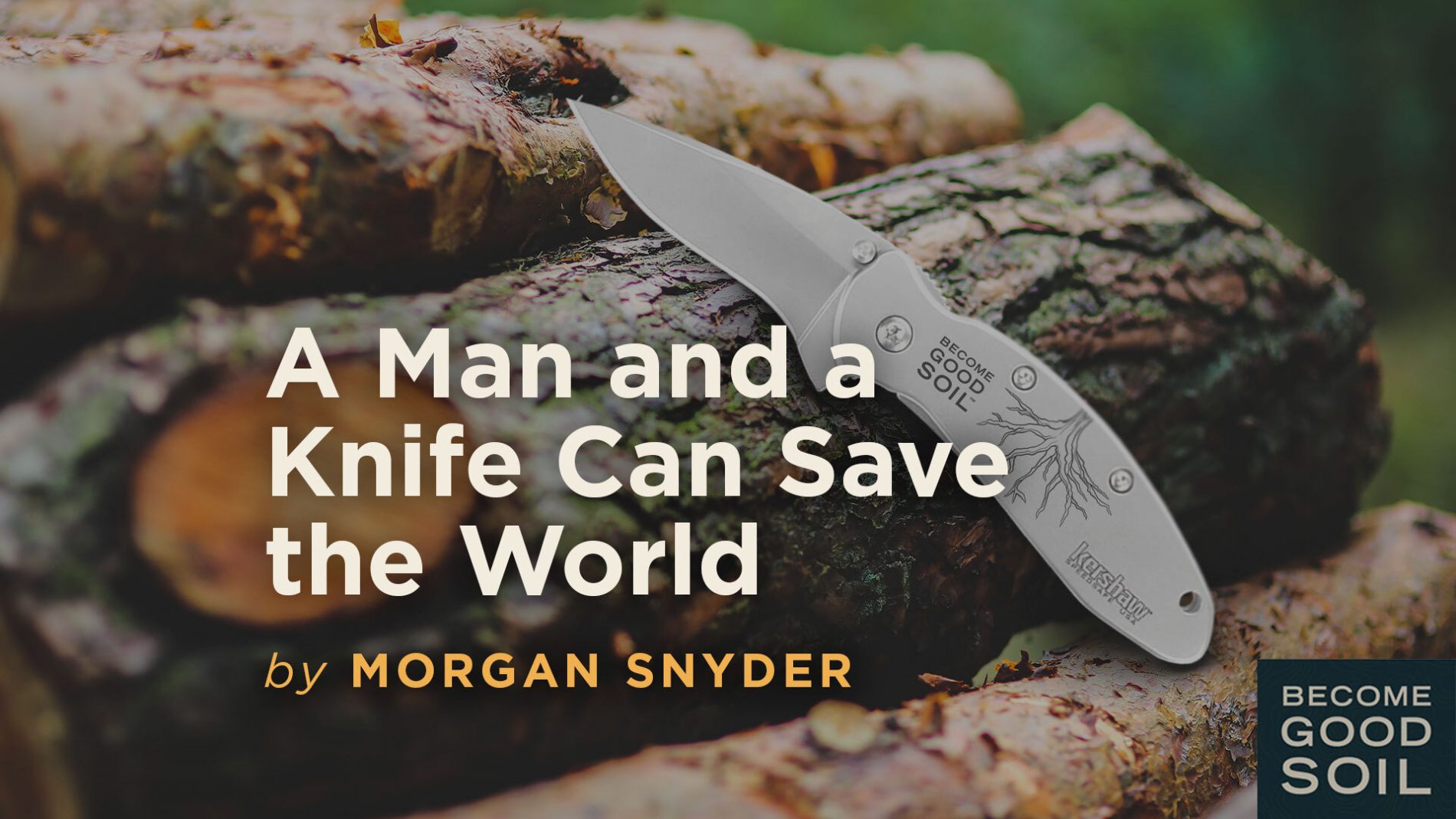 Every one of [the old men] had a good knife in his pocket, sharp, the blades whetted narrow and concave, the horn of the handle worn smooth. These men had known hard use, nearly all of them….You could tell it by their hands, which were shaped by wear….The backs of their hands showed a network of little scars where they had been cut, nicked, thorn stuck, pinched, punctured, scraped, and burned. Their faces told that they had suffered things they did not talk about.
– Jayber Crow, Port William’s barber, 1942

His eyes were ablaze with light. Something in his masculine soul was validated. Something, though unnamed, was called up and called out. He was only 10 years old, but some part of the boy became a man.

Not just in the boy, but also in me.

It happened after I finished teaching at a local church. The staff had assigned a security detail to provide protection for me and my family were an active shooter to target us during the services.

As the Navy SEALs’ motto goes, “Plan for success and train for failure.”

Our hope is to never experience that sort of incident. But if it occurs, the life-safety team at the church is ready to take action.

Right alongside Jim, the head life-safety coordinator assigned to me that morning, was Benjamin, an eager 10-year-old, equipped with his own earpiece and radio to report anything out of the ordinary.

Before the morning services, I learned that Jim and Benjamin were connected through Fathers in the Field, a redemptive ministry whose mission is to provide positive masculine mentoring relationships to boys who have no other father-figures. It’s a mission that calls up good men to provide strong, loving, and wise masculine presence and to help bring restoration where the enemy has waged a war against the heart of the boy.

I was moved to tears when, at the close of our mission, I bent down to thank Benjamin for lending his strength to me and my family. Emotion swirled in me as I considered both the world that Benjamin would go home to without the presence of a positive masculine role model and also the strength, love, and time that Jim was giving from a heart that says, “Fatherlessness will not have the final word on my watch.”

The power of their relationship was palpable. Benjamin embodied a shared confidence as he stood at Jim’s side to provide protection in the mission.

Today, Benjamin became a modern-day superhero. But this wasn’t a movie. It was the real thing.

I knew that I wanted to celebrate and affirm what I saw in him. As Wendell Berry suggests, there are no unsacred places and things, only sacred and desecrated. Benjamin’s self-giving strength turned a seemingly ordinary moment into sacrament.

Kneeling on the asphalt of the parking lot, I pulled out my personal pocket knife and looked him in the eye. “Benjamin, God has made you strong-hearted. You are rare. You are dangerous, for good. I wish I had the strength you have when I was your age. I admire you. You have become one of my heroes. You have protected me and my family. I want to give my pocket knife to you. Every time you feel it in your pocket or pull it out to use it, remember, God, our Father, made you strong. Together with him, you can become who you were made to be. And with him and each other and the tools in our hands, we can become the kind of men who can heal the world.”

Between his smile and my tears, surely the sun stood still.

In Iron John, Robert Bly observes this truth about masculine initiation: It is so very real that its substance actually passes from the heart of the father to the son and from the son to the father.

In that moment of initiation, two boys were healed and strengthened a little more. Our true Father tended us. The boy in Benjamin and the boy in me.

All through a pocket knife and a small moment of intentional initiation.

Every boy must be given opportunity after opportunity to be seen, celebrated, and invited further along the path. As I wrote in Becoming a King,

A man was intended to walk ever deeper into a blend of fierce mastery and determined love, both qualities growing in the context of deepening union with his heavenly Father. In fact, fully restored masculinity is part of God’s answer to the trouble on earth. A wholehearted man walking in intimacy with the heart of God was meant to be one of the most powerful weapons to bring forth life as it was meant to be. A knife can become a physical expression of this spiritual reality. It’s not as much about the knife as it is about what comes through the knife when it is wielded as strength in love. When you pull it out, it’s as if you were saying, “I may not have the answer to the question at hand, but I am here. I choose to show up, to risk, to engage for a greater good.”

A man and a knife can save the world.

There are countless ways to bestow a knife upon a boy or a man. I’ve bestowed dozens over the last decade to boys and men in my world, each time unique, and every time healing some small part of both of our souls.

Today marks the one-year anniversary of the launch of Becoming a King. It’s been an honor to daily set my face like a flint in the mission of reaching the many to find the few. I sensed God was inviting me to mark this moment in my masculine initiation with a knife. In the many years of giving knives to others, I realized I haven’t bought a meaningful knife for myself since I was in sixth grade.

For almost two years I’ve been on the lookout for a specific knife for wilderness adventure, a daily tool for the backcountry that is ultralight without compromising in strength, performance, and utility. I landed on the Become Good Soil Benchmade Bugout but have been reluctant to purchase it for myself.

As I prayed, I sensed the Father say, It’s from me for you. You’re just like Benjamin, and I have been steadily healing the unfathered places in your soul for decades. This knife is on time. You have stewarded the message I have entrusted to your care. Let’s celebrate this milestone together.

Friends, a man and a knife can save the world. God knows how much we need healing to take place in our age. Ask God to invite you to join him in the initiation of the heart of the boy or the man in your world.

Look for an opportunity to call out masculine strength, to celebrate a milestone, and to participate in the path and process of masculine initiation in the lives of those entrusted to your care.

For Father’s Day, it sure beats a pair of socks.

As a way of fueling the mission, we have some new arrivals for our curated Become Good Soil Knife Collection. The specifics of the knife are far less important than the choice to simply invest in the masculine initiation of those entrusted to your care.

Go ahead, change the world. And together, over time, let’s help change the headlines. Let’s invest in stories that will one day become celebrations of strong-hearted men who bring protection in place of harm and courage in place of doubt.

And you can make a difference.

Ask God how, and he’ll show you the way.