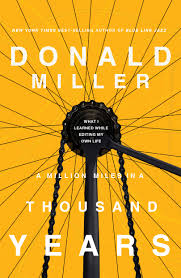 This book revolutionized my parenting.  Our hearts gravitate toward the biggest story we know.  I was brought home to that by Miller. Of course, we were made for the Larger Story. But we so often settle for such small ones.  In parenting, I’m now asking myself – am I inviting my children up into a bigger, better Story than the one they are living today?  Miller is hilariously self deprecating and yet leans into God for his hope. Honest, compelling, inviting.

After writing a successful memoir, Donald Miller’s life stalled. During what should have been the height of his success, he found himself unwilling to get out of bed, avoiding responsibility, even questioning the meaning of life. But when two movie producers proposed turning his memoir into a movie, he found himself launched into a new story filled with risk, possibility, beauty, and meaning.

A Million Miles in a Thousand Years chronicles Miller’s rare opportunity to edit his life into a great story, to reinvent himself so nobody shrugs their shoulders when the credits roll. Through heart-wrenching honesty and hilarious self-inspection, Donald Miller takes readers through the life that emerges when it turns from boring reality into meaningful narrative.

Miller goes from sleeping all day to riding his bike across America, from living in romantic daydreams to fearful encounters with love, from wasting his money to founding a nonprofit with a passionate cause. Guided by a host of outlandish but very real characters, Miller shows us how to get a second chance at life the first time around. A Million Miles in a Thousand Years is a rare celebration of the beauty of life.