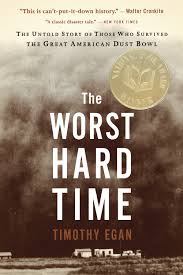 “Read History.”  This was some of the best counsel a sage gave me almost a decade ago and I haven’t stopped since.  Egan is a remarkable writer and gifted historian. While the Dust Bowl has come and gone from most of the collective memory of our nation, the timeless lessons just get better with age.  We have much to learn in this brilliantly told story, particularly in the categories of man and power, nature, stewardship of creation and finding and following the narrow road as Kingdom builders and innate adventure seekers.

The dust storms that terrorized the High Plains in the darkest years of the Depression were like nothing ever seen before or since.
Timothy Egan’s critically acclaimed account rescues this iconic chapter of American history from the shadows in a tour de force of historical reportage. Following a dozen families and their communities through the rise and fall of the region, Egan tells of their desperate attempts to carry on through blinding black dust blizzards, crop failure, and the death of loved ones. Brilliantly capturing the terrifying drama of catastrophe, Egan does equal justice to the human characters who become his heroes, “the stoic, long-suffering men and women whose lives he opens up with urgency and respect” (New York Times).

In an era that promises ever-greater natural disasters, The Worst Hard Time is “arguably the best nonfiction book yet” (Austin Statesman Journal) on the greatest environmental disaster ever to be visited upon our land and a powerful cautionary tale about the dangers of trifling with nature.