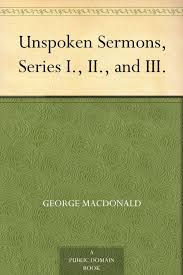 I’ve not encountered a man who knows the Father, and lives out of Sonship, more than George MacDonald.

MacDonald’s Unspoken Sermons include sermons arranged in series building upon one another. Throughout the series MacDonald is more concerned with a person developing a love of God than developing dogmas. His sermons are focused more on doing the will of God than believing true things about God. George MacDonald was a Scottish author, poet, and Christian minister. He is known particularly for his poignant fairy tales and fantasy novels. MacDonald inspired many authors; W. H. Auden, J. R. R. Tolkien, C. S. Lewis, E. Nesbit, Madeleine L’Engle, Elizabeth Yates and there is even evidence that Twain was influenced by MacDonald. It was C.S. Lewis who wrote that he regarded MacDonald as his “master”: “Picking up a copy of Phantastes one day at a train-station bookstall, I began to read. A few hours later,” said Lewis, “I knew that I had crossed a great frontier.” G. K. Chesterton cited The Princess and the Goblin as a book that had “made a difference to my whole existence.”