A king does not abide within his tent while his men bleed and die upon the field. A king does not dine while his men go hungry, nor sleep when they stand at watch upon the wall. A king does not command his men’s loyalty through fear nor purchase it with gold; he earns their love by the sweat of his own back and the pains he endures for their sake. That which comprises the harshest burden, a king lifts first and sets down last. A king does not require service of those he leads but provides it to them. A king does not expand his substance to enslave men, but by his conduct and example makes them free.
– Xeones, Battle of Thermopylae, Gates of Fire 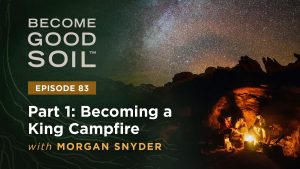 In an age of immediate answers and an overabundance of information, our souls’ questions often get buried, denied, or forgotten.

At times, we abandon them for fear of where they might lead. Often, we give up on them entirely, too ashamed to reveal the depth of our thirst and ache.

But Jesus has not changed, nor has his Kingdom. He is always inviting us to rediscover and hold fast to our questions as his particular way of guiding us back to the path of Life.

What are your questions?

Who are you asking?

But if the goal is to become true and wholehearted, nothing can kill us. If the goal is more of us belonging to more of God, our questions are vital.

Over the past year I’ve had the honor to share campfires with like-hearted allies to connect and hear stories of the men bravely working through the Becoming a King video series and study guide. The campfire I got to share with Pablo Ceron of Wildsons and the behind-the-scenes glimpse of the courage and strength of the men with whom he walks and the Father who pursues us all is a highlight of this series.

Join me around this Becoming a King campfire and be strengthened.