I Am Being Led

Now I have had most of the life I am going to have, and I can see what it has been. I can remember those early years when it seemed to me I was completely adrift, and time when, looking back, at earliest times, it seemed I had been wandering in the dark woods of error. But now it looks to me as though I was following a path that was laid out for me, unbroken, and maybe even as straight as possible, from one end to the other, and I have this feeling, which never leaves me anymore that

I have been led. I will leave you to judge the truth of that for yourself…
there is no proof.
– Jayber Crow 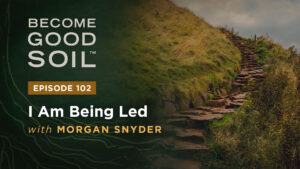 Reflecting on the whole of his story, Wendell Berry’s unforgettable character Jayber Crow utters these words in the twilight of his life. A resident of a small Kentucky town on the banks of the Ohio River, an itinerant barber by trade, Jayber speaks of a feeling that never leaves him: the feeling of being led.

Over seven decades of curiosity, heartbreak, and loyal love for an increasingly marginalized community, Jayber became the kind of man who experiences even the bewildering turns in his story as an unbroken line of grace. Including painful setbacks and unforeseen bends in the road, it was, in fact, the “the straightest path possible.”

Over time, Jayber became the kind of man who now experienced the feeling of being led every moment of his days.

What if, even in the midst of bewildering pain and disappointment, we are actually being led, being led by a Father on the particular path and process of masculine initiation that he has uniquely set for each of us?

What if there is an ancient path that leads to life?

What if you can discover who God meant when he meant you, and find yourself being led to become that man?

It’s all available, dear brothers. And it might even prove to be the apex of our masculine becoming.

Come along with me and a remarkable global fellowship of men as we dive into yet another foundational question of masculine initiation.