There are many people who think they want to be a matador, only to find themselves in the ring with 2,000 pounds of bull bearing down on them, and then they discover that what they really wanted was to wear tight pants and hear the crowd roar.
– Terry Pearce 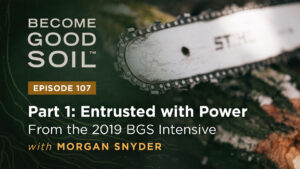 Over 20 years ago, I found myself navigating a man’s world but largely feeling like a boy. Balancing a young marriage, young children, and a young career had punted me into the deep end. Though I was thirsty for God and his Kingdom and doing my best to pursue good and noble endeavors, I was running out of steam.

It was a baptism into adulthood by the fire of overwhelm.

“It felt like I hopped on a rollercoaster that I didn’t remember getting on—it was all I could do to simply hold on.”

That’s how an older friend described this nexus of pressure and responsibility and it felt spot on.

Life became something that happened to me, rather than something to which I was bringing strength and intentionality from a reservoir of confidence and peace.

In response, the myriad of uninitiated little boys in my soul began to surface, leading me to one of the most important days of my life:

The day that I traded my exclamation points for question marks. The day that the Spirit invited me to a path of connected initiation instead of isolating performance.

And it’s made all the difference.

We’re more than a decade into hosting intimate leadership events with apprentices both young and old from around the globe to chase after the treasures of the Kingdom. Now two decades from beginning this quest, it is my joy to invite the extended Become Good Soil Tribe of apprentices to this audio teaching from the 2019 Become Good Soil Intensive. Join me for Part 1 of an extended podcast series diving deep into the restoration of the masculine soul.