He opened the door of the birdcage to let the eagle fly to freedom. But the eagle had been in captivity for so long it no longer believed it could fly, and it chose not to fly. It was then he realized the bird was not in the cage. The cage was in the bird.
– Jonathan Helser 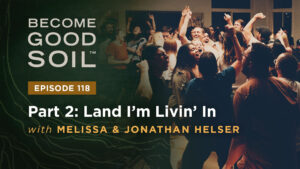 Jonathan David and Melissa Helser have become the kind of people who bring with them, wherever they find themselves, the atmosphere of the Kingdom of God.

Through their pain, they’ve grown into their possibility. Their suffering has given way to an even greater desire. They have seen the goodness of God in the land of the living.

And they are inviting us to come along, courageously following the Father anywhere.

We rise by bowing

We live by dying

When we give what we could never keep

We gain what we will never lose

Join us for Part 2 of this series as we weave together story and song to shepherd our hearts ever deeper into the hope and heart of a God unbound by death.