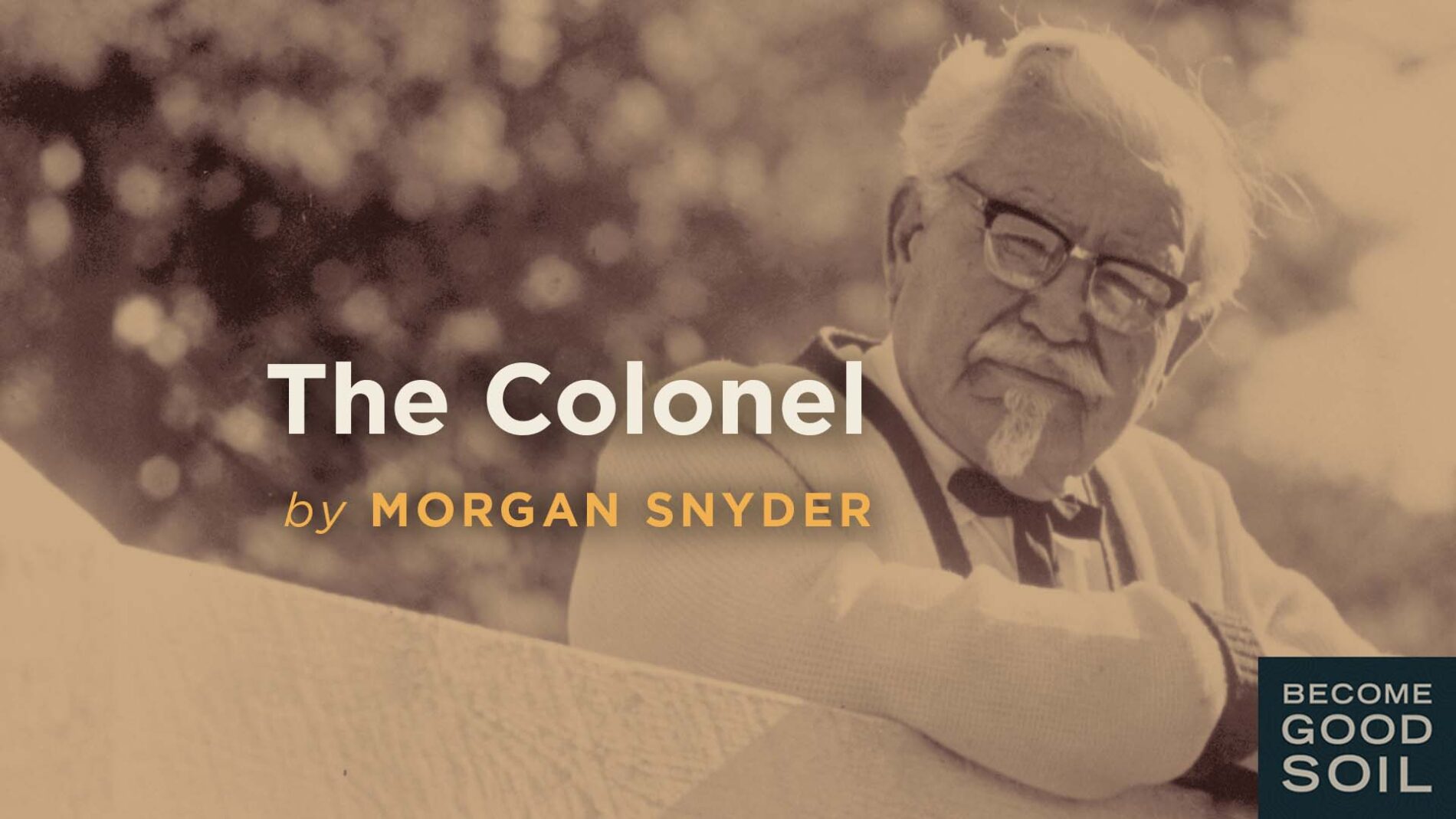 I meet with a counselor every week. We’ve been sharing life together for just over six months now. It has been one of the top three most transformative experiences of my life.

My counselor has a striking resemblance to the Colonel of KFC. Thus he affectionately goes by “the Colonel” among my close friends. Last week when I met with him, I told him that I’ve begun to view the $85 a week as a “grandfather tax.” And I pay it gladly, joyfully. Something in my young heart as a man is learning through him what it feels like to walk through life with a grandfather.

He’s a giant. Outwardly he may appear older, maybe even irrelevant in a culture that worships “youth.”

From a distance he may even appear frail. But make no mistake. When you are in his presence, he is an oak tree.

I find myself resting in his shade. He sees me better, more accurately, than I see myself. He’s not exhausted by me or by my pessimism. He tears up with a smile in his brilliant eyes at the man I am and leaps for joy at the man I’m becoming. I see dimly the man he sees so vividly in me. But it gives me hope. And through him, God is peeling layer after layer off of my false self. Someone new is emerging: the truest me.

I’ve been noticing “old” people more and more. It’s hard and sad to watch strength, vibrancy, and vitality ebb from their bodies like a passing tide.

Yet, I am keenly aware in these observations of one simple fact: as men age, they fall strikingly into one of two categories. One group of “old men” seems to be dead- men-walking. They seem to be shadows of their former selves. They seem sad, waning, and have little stature. The best parts of their lives are lived only in memories. Their best days are behind.

The second category is “old men” who are much more than meets the eye.  At first pass, they may appear “old.”  Yet take a closer and slower look and the hidden treasure is revealed.  There is light in their eyes.

Inwardly, there is strength.  They are mighty oaks. They are fountains of wisdom.  Beacons of hope.   Laughter is true and easily accessible.  There is a resting, settledness, and something that I can only describe as an eager expectation deep within them for what’s to come.
Just this week I encountered another giant. I cued up an hour-long Dallas Willard seminar on my laptop and jumped on the spinning bike. Five minutes into it there was so much substance, “weightiness”

(C.S. Lewis, The Weight of Glory), to his teaching that I had to turn it off and savor it, digest it. What I treated like some commodity – content to consume- I instead found to be a rich and substantive treasure beyond my years. Shade for me to rest me eager soul. Here is strength. They are mighty oaks. They are fountains of wisdom. Beacons of hope. Laughter is true and easily accessible. There is a resting, settledness, and something that I can only describe as an eager expectation deep within them for what’s to come.

Whether I have met them in person, or only through their teachings, these men have become to me more than oaks even: they have become towering Sequoias.

I was in the great Redwoods of northern California this past spring. A native was sharing an interesting fact about these massive and glorious trees. There are varied causes of death for the Redwoods, but “old age” in not one of them.

I am a man in need of great giants whose lives are not diminished by age, but rather enhanced. I need their assurance. I need their laughter, their ease, their hope, their affection, and their camaraderie.

I wonder what I’ll be like as a grandfather. I watch the Colonel with me. And the Father fills me with hope and longing. Longing to be available one day to my adult kids and their spouses and children. I hope they will rest in my shade.

One of the most accessible ways of experiencing that Wisdom is to slow down enough to be present to these great giants.

We must find these shading older men. They are rare. But they are available. Ask the Father everyday to bring them to you, until you have them.

And then become them.