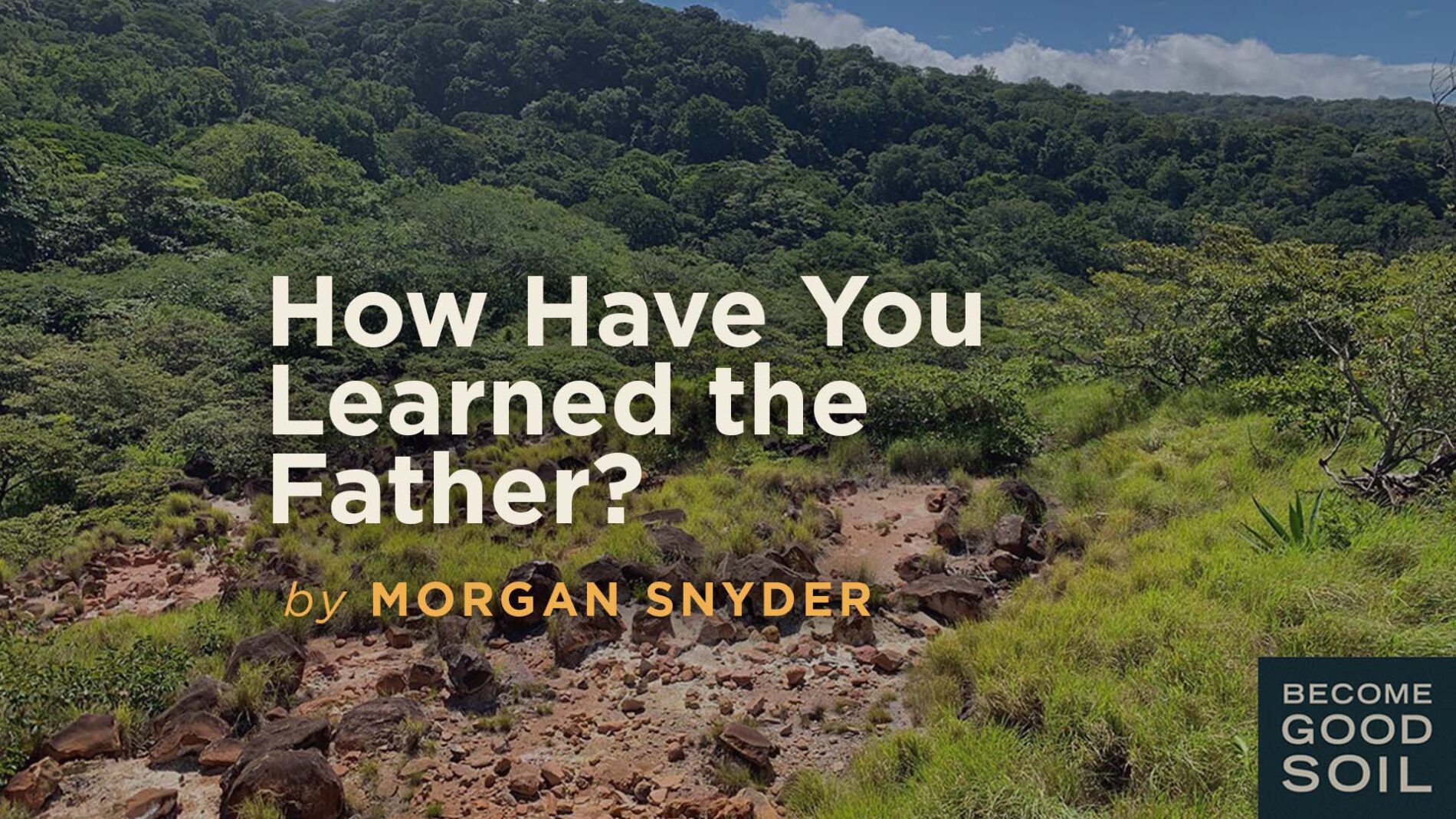 How have you learned the Father?

If we were to dive deeply into this question, become fully aware of our operating beliefs and then consider setting them aside in order to relearn the Father as He truly is, most every other struggle would be wiped away…

Dallas Willard defines Christianity as the process of more of me belonging to more of God. This is my prayer: Oh my Father, Pappa come! Come, that more of me might belong to more of you…

Here’s an an example of on place I’ve been relearning the Father as of late:

Will Reagan Live at the Banks House.  I’ve been cranking up the worship music and soaking, staying, receiving and meditating.  I hold the picture of the parable of the lost son(s) on my heart… I see the older brother far away trying to earn his father’s love only to destroy his own soul in the process. I see the younger brother far off with the pigs… tired, weary, desperate… I see me in both of them… then I see the younger son as he realizes his poverty and his need. I feel his heart turn back to the father and move. Move toward his father and his home.

I then see the father on the porch of his house as he catches the first glimpse of his lost son the horizon, making his way home. I see the tears of joy course down his ancient, weather-worn cheeks. I hear him whistle and call out to his men, “kill the fattened calf!  Start the music!  We are going to celebrate!”  Then I see him run… almost awkwardly as he vaults himself down more steps than he should at his age… sandals awkwardly flailing. His robe swinging back in the wind. Then youth is returning to the father.  His gait is that of a young, strong man. He is ageless. And he’s running toward me. unencumbered. without reservation. overcome with joy.

I’m filled with excuses, regrets, explanations, but somehow the tears pour down my face: my weary soul more deeply responsive than all my rational thinking, and it’s all washed away.  I move toward him but can’t outpace His pursuit of me… He reaches me, His face luminous with affection and his own tears of joy. He picks me up, and spins me around like I’m a child all over again.  It feels new and familiar all at the same time… I am home.

Believe He is coming.

Believe He is near.

Choose him. Find him. Search for him.  Don’t give up. Don’t ever give up.
The disciples were desperate with ache and longing to have the LIFE they saw in Jesus.  What was the Source of this life they experienced in Him? They had to know.

They turned to Him in desperation and hope and asked in all sincerity: Teach us. Teach us “how to pray.”  In other words:  Jesus, we want your LIFE. We want what we see in  you.

And so Jesus begins, and in his first word, every other need is encompassed.

Worship.  Find songs that are anointed to bring the heart of the true Father.  Music like that on the album Will Reagan Live at the Banks House.  Like Mud Song and  How He loves us or  Pete Ohlin’s Majestic Rain, an anointed instrumental album that will invite your heart to soar with the Father.

Sit at the feet of men who have tasted the Father’s love.  Read Brennan Manning.  Read George Macdonald.  Read John’s Fathered by God.  God willing, maybe even some of my teaching on Sonship might give you a nugget or two (use SONSHIP as a code to receive the mp3 for free).

It is rare and remarkable to receive the Father through a worship leader who has yielded to him and made their hearts available for His lavish Goodness to flow.  Find these people. Receive from them.  Do life with them.  Karla is one of them. Adam Paulson, leading Worship at Toth Ministries, is one of them.

This annointed impromptu session by Jonathan David Helser and his wife is one of them I came across just a week ago through a friend has been so core in bringing the Father to my heart.

Risk casting off the shame, the fear, the doubt.

He is jealous for you.