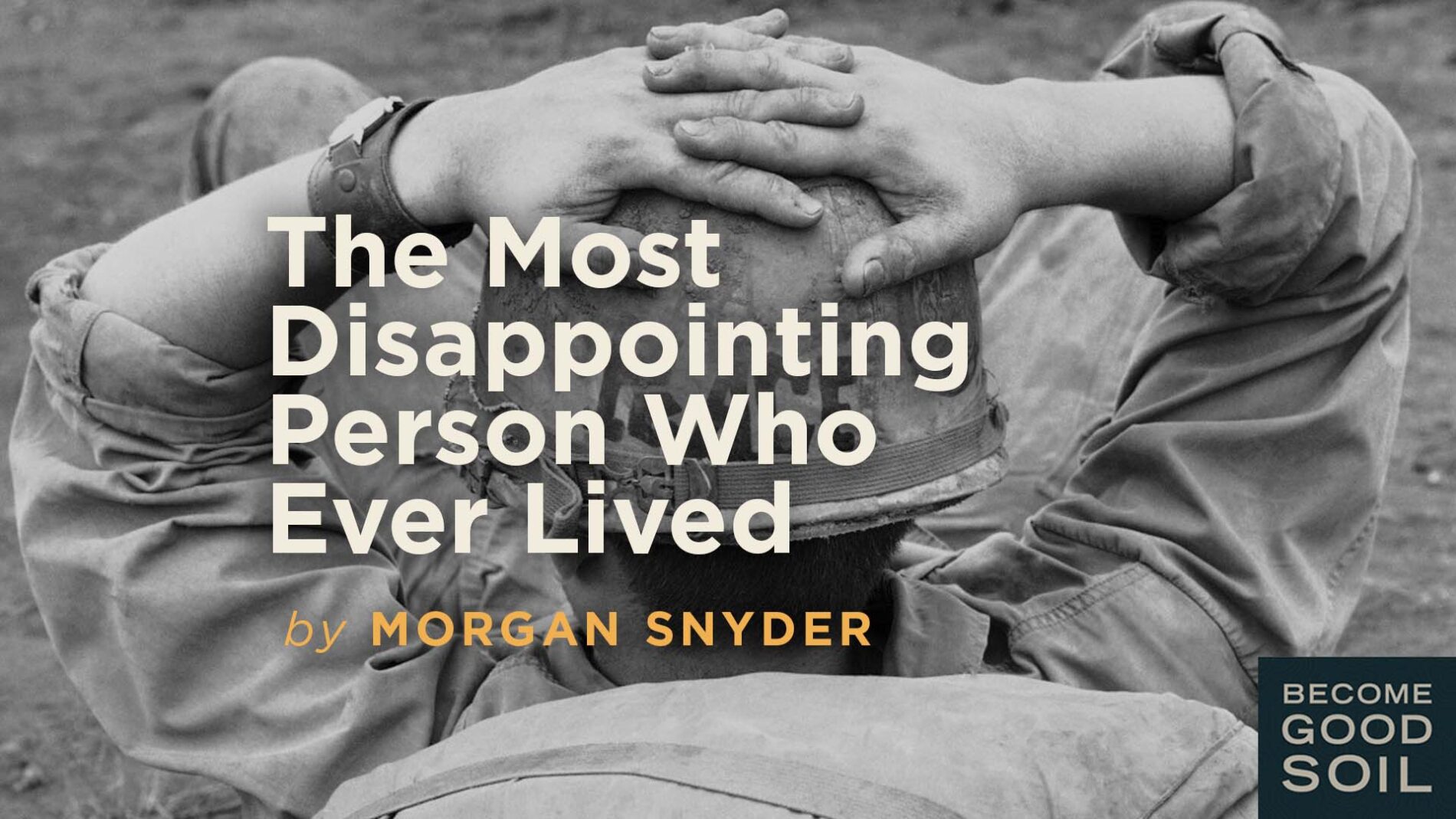 They promised. Today was my chance. My only chance. And yet, the magician vanished as quickly as he  appeared. Mostly what I see in his wake are chaos and rumors. Yet here and there, I can’t help but notice what I can only call miracles. A woman claims that just days ago she was trapped in a body deformed by leprosy; now she is healed and whole. As she tells her story, I cannot deny it—her eyes are radiant with life. She says they were made so by this magician named Jesus.

And the madman from the foothills. The truth is perhaps even worse than the stories spewed by the children who entertain themselves by mimicking his garbled, violent curses. And here he now sits, swathed in his tattered clothes, yet still. Now a man of peace. Rumor has it that the magician spoke not only to him, but to an evil spirit within him. This Jesus cast the spirit out of his heavy-laden body, and now he is free. I have been watching this once-violent man now at ease. For the better part of two days, he has sat peacefully at this well. Not eating, only smiling, resting, and watching as fresh water is drawn up from the depths. His eyes tell the story of a man who has seen the face of God and lived.

So where is my magic?

They promised me a miracle of my own.

I was told this magician from Nazareth could fix the pathetic man I’ve become. Ever since that dreadful day in the field when all went black, I have been dragging this wretched body through the marketplace, half alive and half dead. For nearly a decade, this body has been my utter shame. I once stood tall and proud—now I am a cripple. Simon the Cripple. At least that what she calls me. It’s what everyone calls me. If not to my face, then in whispers in the dark.

But they said today was to be my day. They said this magician is not a mere showman, dazzling the crowd with tricks or fancy words and making a fortune off people’s naive faith. They said he is the Promised One, sent by God, a man of authority against which no disease or demon can  prevail.

He was just here! I saw him. I saw him walking these paths, passing these stalls. I saw his eyes, so calm and clear, that looked like they could not tell a lie.

Then, just as quickly as he appeared, he vanished.

And I am left here. Unchanged. Unmet. Forgotten? I am Simon the Cripple. I will always be.

Put yourself in this man’s shoes.

The Scriptures tell us that when Jesus entered a village, he would not only proclaim the Kingdom of God but manifest it as well. He healed the crippled, the blind, the bleeding, and the oppressed. At times, over the course of a few days, the healed few would become the healed many (Matthew 15:29-31).

And then Jesus would leave. He would move on in order to proclaim and manifest the Kingdom somewhere else.

Think of the disappointment Jesus left in his wake. Put yourself in the shoes of the man who was not healed. Sit in the seat of the physically broken and the spiritually oppressed who were left unattended. What do you do with the unfinished work and the unmet expectations?

Reading the Scriptures, we observe that Jesus’ humanity required him to be in only one place at a time. His obedience to his Father required him to make choices. Choosing to say yes to being in one place meant saying no to being somewhere else.

How could Jesus withstand this? How could he withstand all he was not able to accomplish and all the human suffering he did not immediately alleviate? Is it possible that Jesus’ experience of being well was not attached to each presenting need in the moment-by-moment, but in his Father’s complete sufficiency as the Abundant Center of all things?

The human expectations Jesus left unmet were not a result of irresponsibility; he was not casual about human suffering. But he was clearly willing to leave a gap between what people expected of him and what he offered. From Nazareth to Jerusalem, from Gethsemane to Golgotha, Jesus’ moment-by-moment response accomplished the redemption of all Creation and ignited the Renewal of All Things. It’s easy to focus on the stories of Jesus’ intervention. It takes much more pause and honesty to sit in the seat of the ones whose expectations he failed to meet. The people he didn’t heal, those he didn’t deliver, those whose heart-cry he did not yet answer.

Jesus is clearly not palatable to everyone at every moment. At the end of the Festival of Tabernacles, several days of joyous feasting, drinking, and eating for the people of Israel, he cries out to the crowd, “If anyone thirsts, let him come to me and drink.” Ask yourself, how many are truly thirsty after days of feasting? What a brilliant moment to look for the thirsty after most have been satiated by the pleasures this world offers to fill the holes in stomachs and souls. Jesus offers living water for those who are thirsty for such drink. For the thirsty, he echoes the words of the prophet Isaiah.

“Come, all you who are thirsty,

come to the waters;

and you who have no money,

without money and without cost.

Why spend money on what is not bread,

and your labor on what does not satisfy?

Listen, listen to me, and eat what is good,

and you will delight in the richest of fare.

Give ear and come to me;

Perhaps one of the great graces in which we will ever partner in God’s Kingdom is our willingness to disappoint people for the sake of love. Avoiding disappointing others is often a convenient mask for codependency. Codependency is a pattern of relating that seeks to manage the experiences of others and outcomes in relationships in an attempt to feed our own sense that we’re worthy of love and belonging. So often what we conveniently label as love, sacrifice, or caring for others is simply our efforts to avoid disappointing them in order to avoid feeling shame and fear.

Sometimes it is in working through the discomfort of unmet expectations that we can unmask the false self at work within us and help illuminate the path for others to find what they are most looking for. God searches our thoughts, testing us to reveal the motives at work within us and our relationships. What if disappointing others for the sake of our shared wellbeing is one of the most heroic choices you ever make?

Often it is our courageous consent to disappoint some expectations in order to say yes to Love’s precise path that opens the door for a greater Love to flow. Have you come to terms with why you are uncomfortable with disappointment? Who and when you are divinely intended to disappoint, and why you are willing to do so? Strengthening our yes often comes through becoming more clear in offering our no for the sake of the enhanced wellbeing of the whole.

What stands in the way of your being willing to disappoint people for the sake of love? If the root of disappointment is unmet expectations, for some, Jesus was the most disappointing person who ever lived.

Perhaps it would do our maturing hearts well to consider our resistance to following him along this bend in the narrow road.