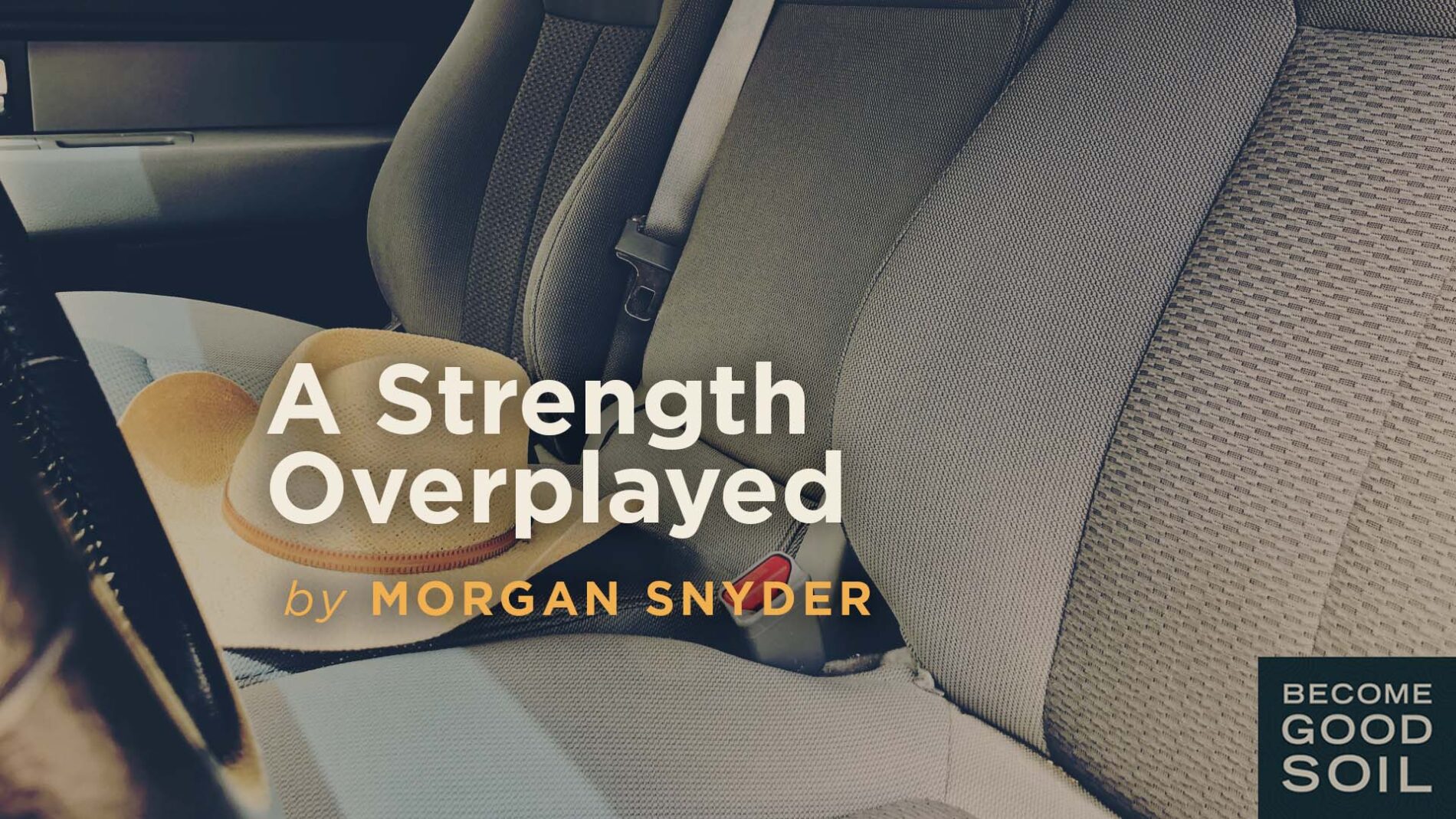 I can tell you a whole lot more about the features of a Ford F-150 than I could’ve a week ago. Which trim packages upgrade to LED box lighting. The range of performance and optional distinctions between the XLT, Lariat, and King Ranch. The benefits of EcoBoost, the pros and cons of flex-fuel technology, and the one place you can get genuine laser-sized, injection molded, interior, all-weather mats.

But the most important thing I can share about the Ford F-150 is that I don’t particularly care about it. I don’t care much about any truck, for that matter. It wasn’t until I found myself standing in an auto dealership parking lot that this revelation came to me:

I was way off track.

The story unfolded as many good stories do: an effort to solve a problem. I was towing a trailer, muscling my old GMC Yukon past a semi truck just west of the summit of La Veta Pass. Though my trusty old steed had a lot of heart, at 232,000 miles, the old tranny finally decided to call it quits. With countless adventures under its belt, this truck deserved a good cowboy funeral and perhaps a few shots of Fireball.

Yet in the interest of time and life’s demands, I tucked my tail between my legs and limped back home in the slow lane. A call to a transmission mechanic confirmed the inevitable: I was on the precipice of an unexpected opportunity; I was going to be able to trade into something that could get us over the pass. And as I do with most things, I threw myself wholeheartedly into the search for a great deal on just the right truck for our family.

The hunt was on. Committed to value, not willing to go into debt, and fiercely determined to not get screwed by sleek salesmanship, I plunged into the search. The stakes increased when I quickly found out that the four-door 4WD pickup truck is currently the most sought-after vehicle class in the lower 48.

I doubled down on my effort.

For the better part of a week, I thought more about the hunt for a truck than I did about more important matters. After scouring the local market with no luck on a great deal, I widened the net to a national search. Over time and with plenty of drama and energy spend, I had a few leads in my sights.

It was about then I found myself in a still moment under the last light of Colorado’s setting summer sun, standing in a sea of endless trucks. It was my brother’s birthday.

I remember the sound of that date spoken more than any other. How many times I listened to my brother repeat his birthday. To doctors, nurses, chemo administrators, counselors, hospice providers. The list was endless. Almost every day for 18 months, multiple times a day, “What is your birthdate?” Coming out of brain surgery and never able to recover, he forgot so many things. But he always managed to say his birthdate, almost as if it were a secret password so someone else could do something to him that he couldn’t understand, and for the most part, probably didn’t want.

It’s been years now since his death. As a tribute to him, every year I try to get on the water and spend some part of his birthday doing what he loved the most: enticing a trout to rise to a dry fly.

The fly rod was with me, to be sure. And I planned on wetting a fly in nearby waters just as soon as I could close the deal on a truck. The negotiating entangled me longer than expected, but I wasn’t willing to leave anything on the table.

With the shadows casting even longer over the sea of trucks in Cañon City, reality crept in like a rising tide: I’d lost the window to fish. Better said, I’d chosen to forsake the gift. Somewhere, somehow, I’d lost my way. Like the tide, resignation seeped in. And I was still short of negotiating the best deal I could.

I must’ve been an odd sight, slowly wandering alone through the overpriced fleet. Not wanting to admit that I wasn’t going to get on the water today, I meandered in a stupor of regret and sorrow, looking like the walking dead long enough that the saleswoman appeared again in front of me. A bit awkwardly, she said, “We closed a while ago, but I notice you haven’t left. Is there something else I can help you with?”

I looked her eye to eye—better said, soul to soul—and some unedited truth just bubbled out:

“Kelly, here’s what I find interesting. Today is my brother’s birthday. All I wanted for the day was to be on the river and fish in his honor. Yet here I stand, in a sea of trucks. And I don’t even care about trucks.”

It was a wonderfully odd moment. God pulled the thread that began to unravel me. Sure, I see the value of a good, working, 4WD drive vehicle as a means to an end. But how in heaven’s name did I give so much of my strength away—for a week—to the pursuit of a vehicle when, a week ago, I cared very little? And today, after a week’s education on market and options, now I cared even less.

The next morning as I centered back in God, the fog in my soul began to dissipate. I began to see another layer of excavation that the One Who Pursues Me was after. Mike Mason’s evocative words surfaced in my heart. He speaks of the soul of a man being like a densely populated city: nothing new can be built in his heart without something else being torn down.

God readied my soul to receive the rescue that came through a trusted friend. Aaron is close enough to have real eyes on my life, to love me with kindness and curiosity, always with firm compassion, guiding me into the deeper maturity for which I long. In a kind conversation, he invited me to consider what was exposed through the story of the hunt for a truck:

A strength overplayed becomes a liability.

The conviction set in as I began to see in an entirely new light. After all, without effort, we see things not as they are, but as we are.

The implications of the exposure stood well in view. This wasn’t about purchasing a truck. It had become a living parable of a way back to the narrow road. A light was being shined on a systemic problem and pattern that, sadly, weaves itself through most of my life. The image of God in service of the false self is one of my most common threads. Though the circumstances and characters in the story change, the arc of the narrative remains painfully constant. How often I find myself overplaying a strength until it becomes a liability.

By way of repentance and making a two-degree shift toward life, I quit the search for a truck. In courage, I threw up the white flag, choosing God over getting a phenomenal truck at incredible value. I bought the one in front of me. I said yes to what felt like “good enough.” Emotionally, it felt like weakness, failure, or settling. Yet in my spirit, I chose to trust that this was actually an act of repentance, and repentance always holds the promise of partnering with God to pass through a death into a greater strength and a more vibrant life.

The false self is relentless in hijacking the strength of God deep within us so that it becomes a liability to us, to others, and even to God. Perhaps one of the great places of initiation for our masculine soul is cultivating the practice of not overplaying our strengths. What does it look like for our God-given strengths to be brought under reign? What would it look like for my strength to be governed by the intimate leadership of the Spirit, so that my strength becomes deployed only when, how, and where I am led by God, and nothing more?

Two days later, a tear came to my eye as unanticipated happiness flooded my soul. My daughter, Abigail, and I were on our maiden voyage in the “good enough” truck, a bit newer version of the trusty old steed that had carried us into many adventures before. We were side by side with a pair of stand up paddle boards strapped in the bed of the truck. She smiled, teased me, and sang one of our favorite songs. A memory came back, unlooked for, from nearly 20 years before, and I recalled a younger version of myself who dreamed of owning a pickup with a bench seat where my girl could sidle up close by my side and we could chase the setting sun together into some unknown adventure. Wild, unfettered, and free. The One Who Remembers Intimately remembered what I had forgotten.

As it turns out, the feature that mattered most in my hunt for a truck wasn’t the tow package, the EcoBoost, or the 5.0L V8. It was the bench seat that gave me the chance to be even closer to my little girl so we could savor these precious and fleeting years of chasing wild side by side. Oh, how generous is our Father that he would give us what we had lost touch with wanting.

I suppose the emotion of that moment was telling a deeper story still: the response of a son who found himself pursued by a Good Father in the center of the unfinished places within. Through risking to receive the challenging words of a caring friend, and even in the midst of strength overplayed, liability is not the final word. The One Who Sees Me is always making a way to come home. For this season, it looks like the way toward home has a bench seat and a bright-eyed little princess helping me not take myself too seriously.