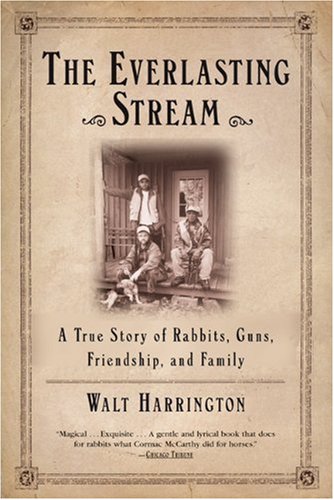 When Walt Harrington was first invited to Kentucky to hunt with his African American father-in-law and his country friends–Bobby, Lewis, and Carl–he was a jet-setting reporter for The Washington Post with a distaste for killing animals and for the men’s brand of old-fashioned masculinity. But over the next 12 years, this white city slicker entered a world of life, death, nature, and manhood that came to seem not brutal or outdated but beautiful in a way his experience in Washington was not. The Everlasting Stream is the absorbing, touching, and often hilarious story of how hunting with these “good ol’ boys” forced an “enlightened” man to reexamine his modern notions of guilt and responsibility, friendship and masculinity, ambition and satisfaction.

In crisp prose that bring autumn mornings crackling to life, Harrington shares the lessons that led him to leave Washington. When his son turned 14, Harrington began taking him hunting too, believing that these rough-edged, whiskey-drinking men could teach his suburban boy something worthwhile about lives different from his own, the joy of small moments, and the old-fashioned belief that a man’s actions mean more than his words.

The Everlasting Stream is a funny, intimate, inspiring meditation on the meaning of a life well lived.