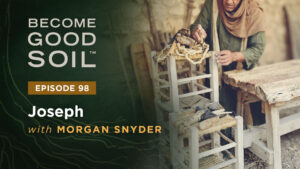 God invades humanity through the womb of an unwed 14-year-old Jewish girl?

Mary had been betrothed to Joseph in a romance fit for a fairytale, but her story suddenly appeared to be going sideways. Joseph could’ve bailed; it was his right given the alleged adultery. How does a woman get pregnant without having sex? If he had chosen this path, would Mary have been left, like most unwed young mothers at the time, with no recourse but to sell her body as a prostitute in order to ensure the survival of her child?

What was going on in the heart and soul of Joseph that caused him to risk everything on God?

G. K. Chesterton observed that Jesus made three promises to those who consented to being his disciples: they could be completely without fear, absurdly happy, and in constant trouble. No story highlights this trinity of experiences more than the circumstances of the Incarnation.

Friends, as we draw closer to Christmas and the celebration of the Rescuing Creator’s great invasion of our raw and fragile human scene, may this creative rendering from Joseph’s perspective grant you pause. May his story slow you down and draw you afresh into the Deep Magic of the Kingdom of God.

May this story strengthen you with wonder, and may you find yourself newly awed before the invitation that your Father in the Heavens extends to you to play an irreplaceable role as his apprentice in the greatest Story of all.

P.S. To reflect even more on the paradox of this “Average Joe,” take six minutes and dive into this video created by one of our BGS allies.

P.P.S. Much of this episode is drawn from a compelling Christmas book, The Indescribable Gift. Blending tradition, biblical story, historical fact, and sanctified imagination, Richard Exley uses words like chisels and scalpels to unveil the heart of the Incarnation. You don’t want to miss a chance to add this collection of beautifully imagined eyewitness accounts to your holiday library.